Pray for Us in These Times of Confusion, O Mother of Good Counsel 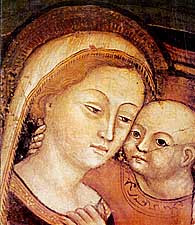 The miraculous fresco of Our Lady of Good Counsel in Genazzano, Italy.

Does the devotion to the Mother of Good Counsel have any significance for our times?

Undoubtedly, innumerable souls in our disturbed and afflicted times are in need of good counsel in some way or another. They could do nothing better than to implore the help of her, whom Holy Church invokes as Mater Boni Consilii in the Litany of Loreto.

This is the first premise which shows that the devotion to Our Lady of Genazzano is especially necessary in these times, which could go down in history as the greatest period of confusion.

Moreover, if we broaden our horizons beyond our individual lives and consider, from a historical perspective, the crisis through which the Church of God is now passing, we cannot help but conclude that, now more than ever, mankind needs the good counsel of the Virgin of virgins…

The modern world finds itself at the crossroads of a dark, gloomy future, faced by either capitulation before the extremes of evil or an enthusiastic embracing of the plentitude of truth and goodness.

The problem is how to move humanity towards the path taken by the prodigal son who returned to his father’s house.
This is impossible without the powerful help of grace speaking in the interior of countless souls. And what better way is there to obtain this good counsel, which must be intimately present in hearts for the salvation of humanity, than to implore the Mother of Good Counsel to convert, through a new grace, the “super-civilized” barbarian of the our times?

Only in this way will we be able to “burn what we have adored and adore that which we have burned,” as did the sub-civilized barbarians of the fifth century. Only then can a new and even more splendorous era of Faith be born. This is the good counsel par excellence that the devotees of Mary must ask for themselves and for all men of our days.

It may appear excessive to some readers that we call these the most confused times in history. Nevertheless, among the many proofs of this assertion, we need only one to justify our affirmation; indeed, it would be difficult to prove that the confusion in Catholic circles has ever been greater than it is today.
Certainly, there were times when the Church appeared to be engulfed by greater confusion.

But those crises were struggles that either involved personal matters rather than principles or jeopardized only some principles – albeit basic ones – of Catholic doctrine.

Today, on the contrary, there is no error, no matter so crass or total, that does not seek to cloth itself in more or less new clothing in order to gain free admission into Catholic ambiences. One can say that we are seeing in our midst an open parade of all errors, disguised in sheep’s clothing and deceiving many unwary, superficial Catholics who have but little love for their Faith.

How many concessions, how many acts of false prudence, how many criminal courtships with heterodoxy take place! The confusion is so great that more than a few zealous Catholic circles are regarded with derision or suspicion, while the horde of disguised errors reigns confident.

Describing this scene, we affectionately but apprehensively consider the many souls whose circumstances of life do not permit them to undertake comprehensive religious studies. How necessary it is for them to have the good counsel of Our Lady to overcome this confusion!

It is natural, then, for us to affirm that these times represent the greatest confusion of history and for our lips to plead a supplication to the Mother of God: Our Lady of Good Counsel, pray for us and help us to remain faithful to the Way, the Truth and the Life in the midst of so much rebellion, so much deceit and so much destruction!