Why does Comedy Central insult Catholics, but respects Muslims? 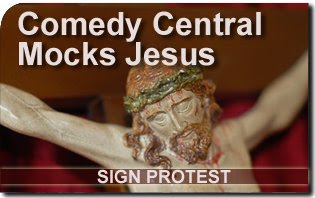 According to press reports, Comedy Central writers are describing the new series JC as “a playful take on religion and society with a sprinkle of dumb.”

For example, God the Father is shown as someone who is lazy, plays video games and neglects his son.  In turn, Jesus is distant from his powerful and lazy father, and tries to become a regular guy in New York City.

Since final approval at Comedy Central for JC is still pending, please:

The Blatant Double Standard
Time and time again, Comedy Central has censored images of Muhammad on its program South Park.

Yet they allow Our Lord Jesus Christ to be mocked and insulted without scruples.  For example, Comedy Central ran “Sacrilicious Sunday,” a series of shows highly offensive to Catholics.

Posted by Robert Ritchie at 1:47 PM