Those who participated in the Public Rosary Rallies were remembered in a special way at Fatima on October 13.

On the huge plaza at the popular Marian shrine, over 13,000 red and white roses were displayed in honor of 7,515 rosary captains and 6,000 other rally supporters.

The 7,515 red roses corresponded to the same number of spiritual roses in the form of Public Square Rosary Rallies across the country. The rallies are a special project of TFP-America Needs Fatima.

A special delegation of campaign members went to Fatima on October 13, the 94th anniversary of the miracle of the sun to deliver the roses.

Many pilgrims from different countries were there on this special day, and helped the five-member delegation deliver the roses to Our Lady. 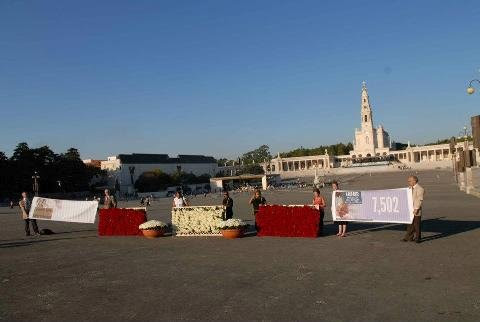 Posted by Robert Ritchie at 9:05 AM