7,515 rosary rallies carried out today – the seemingly impossible was accomplished

Today, thanks to the intercession of Our Lady, there were 7,515 Public Square Rosary Rallies held across the United States as well as in 22 other countries across the globe. 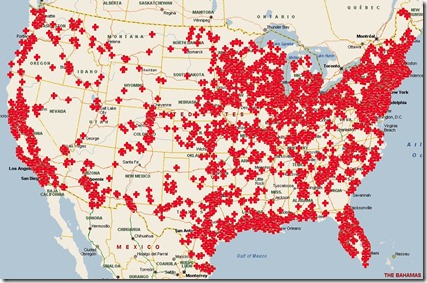 This is what the map of the USA looks like with each rally location marked by a flag.

Be Realistic: Demand the Impossible!

At times, those who take action for God’s Cause must demand the impossible.

For example, in 1968, during the revolution of the Sorbonne in France, the agitators posted a slogan on campus that said, “Be realistic: Demand the impossible!”

If revolutionaries with an anti-religious agenda have that much audacity, how much more should the children of Mary have the right to expect the impossible. What appears impossible to the mediocre mind and to the faint-hearted is possible to those whose hearts are on fire.

History abounds with such examples. In Barcelona, Spain, there are replicas of the three ships in which Christopher Columbus sailed for the Americas. They are mere nutshells seemingly incapable of crossing a lake, much less and ocean. Yet an ocean they crossed, and when the faint-hearted on board were about to mutiny, there was the cry of “Land, Ho!” The “impossible” had become a reality because of the daring of a few.

This principle is even more rich and beautiful from the supernatural perspective. Those who look beyond purely natural expectations to supernatural solutions can at times expect the impossible. We know that when Divine Providence wills something, it realizes it against all hopes and natural appearances. Additionally, we know that Our Lady’s prayer is omnipotent with her Son, and that she obtains from Him everything she asks. Thus, trusting in Our Lady, we must at times demand the impossible from ourselves and from others.

But how do we know Our Lady will grant what we ask? The Book of Confidence of Fr. Saint Laurent begins with these magnificent words: “O voice of Christ, interior voice of grace that murmurs in the depth of our hearts words of sweetness and peace.” Truly, at times the wordless voice of Grace speaks to our hearts by means of a presentiment, an interior movement or a consolation.

We may not be able to put our finger on it, but we know we’ve been touched.

At such moments, thus backed by by Our Lady, we are encouraged to take the leap and to trust that we will obtain the impossible thing we are asking. At those moments we must believe the unbelievable, approach the unapproachable and surmount the insurmountable.

Still, how do we know that what we ask is God’s will? How can we be sure that we are not being motivated by some fantasy or exaggeration of our own making? The answer is simple. If the given thing, presentment or movement of soul leads us to be more united to Holy Mother Church, and does not flatter or promote our self-love or vanity, then this presentment is from God. What we ask may not come about in the way we expect but, ultimately, it will come true.

Thus we can expect mountains to move, and doors to open where there are none. Thus with our eyes on Our Lady we can be realistic in demanding the impossible.

Today, the seemingly impossible was accomplished in the 7515 rosary rallies carried out across America and the world.

May the Blessed Virgin Mary take our small actions and present them before the Throne of Her Divine Son in Heaven.  May She use our rallies as leverage with Her Son, to end the predominance of sin in our world, and to usher in the reign of the Immaculate heart of Mary that was promised at Fatima in 1917, when Our Lady said:

“In the end, My Immaculate Heart will triumph!”

On that day, the impossible will become reality!  May it happen soon, and may we all be there to see it.

Posted by Robert Ritchie at 6:38 PM