Americans make historic pilgrimage to Our Lady of Good Success in Quito, Ecuador 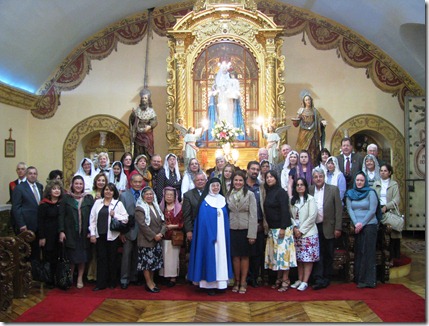 Over 30 Americans, TFP and America Needs Fatima members, supporters and friends just completed a marvelous pilgrimage to Quito Ecuador.  This pilgrimage commemorated the 400th anniversary of the apparitions of the miraculous statue of Our Lady of Good Success in Quito.

Everyone who had the privilege to participate in this pilgrimage left a changed person.  The graces were of a great intensity.  Our Lady's majestic and maternal presence was palpable to all.

Many tears of repentance and joy were shed on this pilgrimage.

Besides the incredible statue of Our Lady of Good Success, there were so many other beautiful and miraculous statues that were venerated throughout Quito, to further fortify the pilgrims.

The pilgrims were also moved by the massive devotion of the crowds who flocked to Our Lady of Good Success.  At the rosary of the dawn which began on February 2nd at 5AM thousands were present.  At the beginning of the outdoor procession and rosary, thousands of rosaries were distributed to the multitudes.

Once the crowds saw the rosaries that were to be passed out for the procession, they flocked to the brave distributors.  One Ecuadorian lady described the impending mass of participants to one of the Americans as a stampede.  A stampede it was, but a stampede of fervor for Our Lady.

The priest who accompanied the pilgrims was overwhelmed wherever he went.  The faithful either asked for his blessing or for Father to hear their confession.  Father spent hour upon hour almost everyday hearing many confessions.

As more news comes in we will post many more details about this historic pilgrimage.

Posted by Robert Ritchie at 9:46 PM