Graces in abundance during Quito Pilgrimage

Yesterday the comments about the highlight of the pilgrimage to Quito was described. As you may recall the absolute highlight was the statue of Our Lady of Good Success. 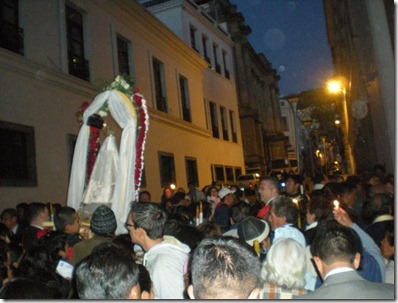 Today our pilgrim wanted to inform our readers about the two most important events that took place during the pilgrimage.

He tried to determine one single event, but the two were so magnificent they had to be included together.

This year for the 400th anniversary of the apparitions of Our Lady of Good Success thousands were present.  TFP members and supporters arrived around 3:30 in the morning to begin setting up.  8,000 rosaries were brought to distribute to those in attendance, that is until they ran out.

Around 4 AM the Church began filling with the faithful.  Once the Church was full the streets filled.

Shortly before 5 AM the outside crowd began lining up for the procession.  At that time ten TFP members and supporters began the distribution of the rosaries.  The rosaries were contained in a little plastic bag with a holy card.  When the crowd saw the rosaries being distributed they rushed towards the volunteers.  One volunteer said that he had never experienced anything like it in his life.  Hundreds targeted each volunteer with outstretched hands.

At 5 AM the procession began in earnest with a band and a multitude leading the way for Our Lady.  When the lengthy procession ended, the Church filled again with the faithful.

This was a truly overwhelming experience.  Thousands of people getting up very early in the morning to honor Our Lady with a public procession.  This was one fantastic public square rosary.

All of the pilgrims in attendance were moved by the love for Our Lady demonstrated by the Ecuadorians.  Most of the pilgrims are rally captains.  This public rosary inspired all to make even greater efforts towards perfecting their public square rosaries for October 16th, 2010.

The chaplain for the pilgrimage entered the chapel at 4 AM.  He was immediately mobbed with requests for confessions.  He did not stop hearing confessions until 11 AM.

Tomorrow a description of the equally other most important event.

Posted by Robert Ritchie at 6:24 PM