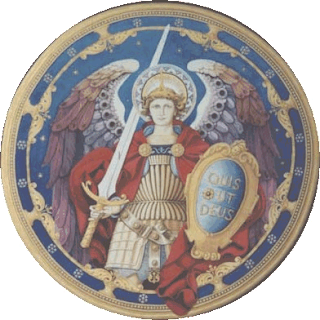 The New York Times did not mention it. Several other news sources also ignored the fact.

However, The Wall Street Journal did tell the story of a Marine who was shot squarely in the head by a sniper. The bullet went into the helmet but did not kill the Marine. In fact, he was not even taken out of action. Lance Cpl. Andrew Koenig had special protection.

What most people do not know is that inside the helmet, Lance Cpl. Koenig had put a picture of Saint Michael the Archangel.

The Wall Street Journal of February 16 reported that Lance Cpl. Koenig turned his helmet over to display the picture card tucked inside, depicting Michael the Archangel crushing Lucifer's head. "I don't need luck," he said.

Afterwards, Lance Cpl. Koenig put his dented helmet back on his head and climbed back to his rooftop duty within an hour of being hit.