Saint Joseph: co-participation in the greatest events of history

The great Saint Joseph was of illustrious ancestry, yet lived in obscurity among those of the lowest social class of his time; a marked contrast with his high birth. 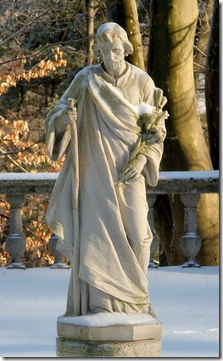 He had little of the natural means by which men become great. He had neither armies or subjects to spread about the glory of his name. He had not the funds to climb to high position. He lived humbly and unknown in the shadow of the majestic temple of David, in the land where Solomon’s wisdom once reigned.

Nevertheless, he was resplendent with the fire of charity. His intense love of God, his admirable spirituality and interior life made his soul pleasing to the Most Holy Trinity. It is this humble man who is called to participate directly in events that caused the most remarkable facts in history, such as the Redemption of mankind.

Posted by Robert Ritchie at 4:57 PM