The famous legend which inspired “The Miracle of Theophilus, “ took place in Sicily and is immortalized in stone in the Cathedral of Notre Dame in Paris. 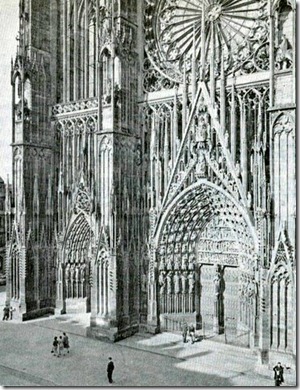 Turning to Black Magic for answers

Midnight. The narrow, winding streets of the city were empty. Concealed in his black gown and hidden by the shadows of the night, Theophilus stole away to the door of a dreary house in the Jewish neighborhood. Soon afterward, he was received inside by a wizard who listened to his woes and problems.

“No,” the wizard pointed out to him. “My alchemy can do nothing in such delicate case.”

What was Theopilus’ problem? As a parish priest in a prosperous diocese in Sicily, he had for a long time administered Church properties with care and dedication, making it easier for his bishop to govern souls.

However, to the great sadness of the faithful, one day the bishop died. Who was to become the new bishop? “Theophilus, of course!” everyone declared.

When the honor was offered to him, Theophilus declined with simplicity, stating that it was his vocation to remain a parish priest.

Eventually, a new bishop was installed in that diocese. But the prelate did not trust Theophilus and dismissed him a little later.

Despair and the Devil’s artifice

Sadness and desolation invaded the priest’s soul. While he wandered about the streets of the town the devil whispered to him, “To lose your post! To lose your career! How could they do this to you, Theophilus? You can’t let this situation stand!”

It was in this state of soul that the unfortunate priest knocked on the wizard’s door. The latter, however, told him the solution is not easy.

“There’s only one way out, “said the wizard, “to invoke the help of evil powers.”

Theophilus hesitated for a moment, but resentment ate up his heart. He finally accepted the proposal. Invoked by the wizard, the devil immediately appeared in all his hideousness. 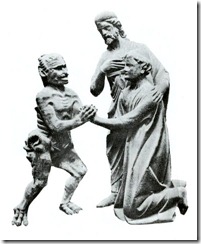 Amidst shouts, blasphemies and course words, Satan dictated to Theophilus the terms of his contract which was to be written on parchment by Theophilus’ own blood, and sealed with his ring. He was to renounce the Catholic Faith, the Church, the Most Holy Virgin, and Our Lord Jesus Christ.

Gaining the world at the loss of his soul

This infamous scene is etched in stone above the door leading to the cloister of Notre Dame Cathedral in Paris. Kneeling down, the former parish priest pays homage and promises obedience to the devil who appears as a monstrous figure. As in a medieval ceremony of vassalage, wherein the vassal promised obedience to his lord, Theophilus put his hands together, palm to palm, and the devil clasped them with his own, signifying that he would protect the person placing himself under his authority.

Theophilus soon recovered his post. Fortune and pleasures smiled on him, but a great malaise tormented his soul. He felt as though an invisible hand were crushing his heart. In addition, he felt extremely unhappy with the simple idea that one day his happiness was going to end. Most of all, he was terrified with the knowledge of who his master was. 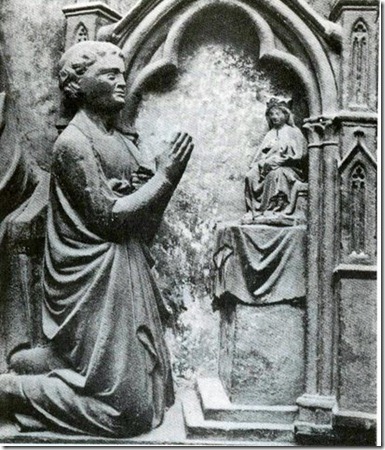 Remorse and Our Lady’s pardon

Unable to bear that situation any longer, Theophilus entered the church and threw himself at the feet of the Most Holy Virgin and bitterly wept for his sin. He did this for forty consecutive days, renewing his supplications and begging for forgiveness.

One evening Our Lady appeared to him and severely reproached the infamous deed he had committed. Always in tears, Theophilus implored mercy from the Mother of God, reminding Her of so many examples of sinners such as David, King and Prophet; St. Mary Magdalene; and St. Peter. Our Lady said She would forgive him for having denied Her, but that She could not forgive him for having denied Her Son. Theophilus prayed fervently, but he dared not to address Our Lord, but asked Our Lady to intercede for him.

The Holy Virgin reminded him that, before anything else, it was necessary to retrieve the contract he had signed with the devil. The contract was in hell, She said, and Christ would not go to such a hideous place to get it. Finally, full of mercy, Our Lady decided to retrieve the contract Herself. For three days, Theophilus lay prostrate on the ground. Then, the Immaculate Virgin appeared again and gave him the contract as a symbol of Her pardon. 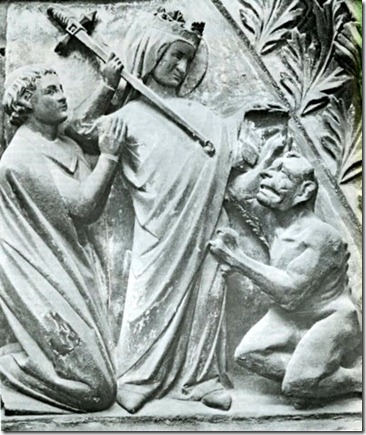 Our Lady, an icon of strength and fortitude

This apogee of mercy of the Mother of God is depicted in the impressive illustration. While the repentant priest prays fervently, the Most Holy Virgin with sword in hand – a model of fortitude – obliges the devil to return the parchment. In this picture, Theophilus shows confidence and calm; Our Lady appears full of strength and maternal protection; and the devil displays cynical hatred and profound despair.

However, this is not the end of the story. After Sunday Mass, which was celebrated by the Bishop, Theophilus publicly confessed his sins. The cursed parchment was burned as the people chanted in thanksgiving. Three days later, Theophilus died, comforted by the holy Sacraments, and was buried in that same church.