At a time of great soul-searching for America, pre-launch of ‘Return to Order’ book draws enthusiasm

At the conclusion of the 40th Annual March for Life, the American Society for the Defense of Tradition, Family and Property (TFP) again welcomed foreign delegations to the March at its Washington Bureau.

The evening of January 25 provided the opportunity for friends from far and near to greet the visiting guests, among them Duke Paul of Oldenburg, as well as delegates from the Netherlands, Italy, Belgium, and Lithuania. 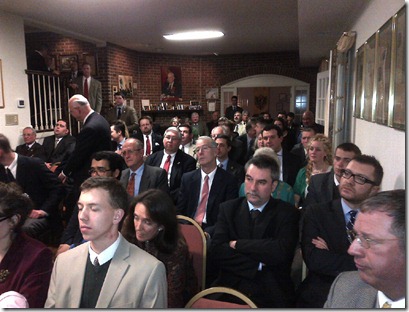 He then introduced the keynote speaker, Mr. John Horvat II, Vice-President of the American TFP, and author of the much anticipated new book titled Return to Order: From A Frenzied Economy to An Organic Christian Society – Where We’ve Been, How We Got Here, and Where We Need to Go.

Mr. Horvat likened the launching of the book to the launching of a battleship: the culmination of many years of work, but also the beginning of a grand adventure, where the ideas presented will enter the bruising and grueling battle of the modern socioeconomic crisis.

The book comes at a time of great soul-searching for America, and for conservative America in particular.  As the storm gathers on the horizon, the principles expounded on in Return to Order will serve as a lighthouse so that we, as a nation, will be able to find safe harbor.

Mr. Horvat then went on to explain what sets Return to Order apart from other books which deal with the topic of economics. Falling in line with the central thesis of frenetic intemperance, he focused on the economic problems and the moral problems which simultaneously plague our nation.

The proper statement of the problem is key: Return to Order  exposes the dangerous undercurrent, properly called frenetic intemperance.

The solution to the crisis is found in an organic Christian society.

His insistence on the family, community, and Church being the firm foundation for the practice of virtue resonated well with the audience. With his final remarks, Mr. Horvat poignantly stated that America is worth fighting for, and the timeless principles in Return to Order will be like a fully-armed battleship for the bruising battles ahead. This garnered an enthusiastic standing ovation.

A lively question and answer session followed, with Mr. Horvat fielding a wide variety of questions, from the Church’s teaching on usury to the differences between the ideas in Return to Order and those promoted by distributists.

Mr. Horvat remained to sign books afterward, and audience members eagerly purchased copies and further discussed with the author the many topics addressed. Conversations lingered long into the evening.

With the economic and moral crises in America worsening, the need for a Return to Order is more necessary than ever.  Like the Prodigal Son spoken of by Our Lord in the Gospel, let us as a nation realize we have erred, and make the decision to return to Our Father’s house.

Once there, we can discern God’s marvelous plan for America, and build an organic Christian society where all is oriented to the good, the true, and the beautiful.