Our knowledge of the life of the elder Macrina is derived mainly from the testimony of the great Cappadocian Fathers of the Church, her grandchildren: Basil (Ep. 204:7; 223:3), Gregory of Nyssa (“Vita Macrinae Junioris”), and the panegyric of St. Gregory of Nazianzus on St. Basil (Gregory Naz., Oratio 43). 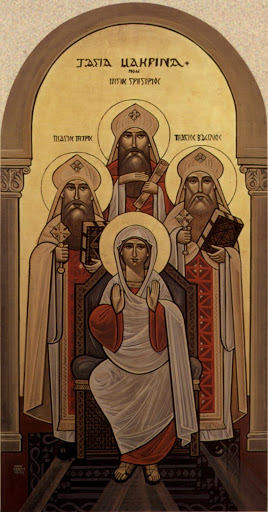 St. Macrina the Elder was was the Grandmother of St. Basil the Great, St. Gregory of Nyssa, St. Peter of Sebaste, and St. Macrina the Younger. Photo by Pishoy D.

She was the mother of the elder Basil, the father of Basil, Gregory, and other children whose names are known to us, including Macrina the Younger. Her home was at Neocaesarea in Pontus. In her childhood she was acquainted with St. Gregory Thaumaturgus, first bishop of her native town. As this venerable doctor, who had won Neocaesarea almost completely for Christianity, died between 270 and 275, St. Macrina must have been born before 270. During the Diocletian persecution she fled from her native town with her husband, of whose name we are ignorant, and had to endure many privations. She was thus a confessor of the Faith during the last violent storm that burst over the early Church.

On the intellectual and religious training of St. Basil and his elder brothers and sisters, she exercised a great influence, implanting in their minds those seeds of piety and that ardent desire for Christian perfection which were later to attain so glorious a growth. As St. Basil was probably born in 331, St. Macrina must have died early in the fourth decade of the fourth century. Her feast is celebrated on 14 January.