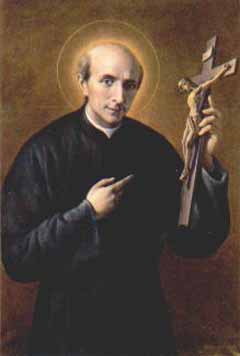 The founder of the Pious Society of Missions (q. v.), born at Rome, 21 April, 1798; died there, 22 Jan., 1850. He lies buried in the church of San Salvatore in Onda. He was descended from the noble families of the Pallotti of Norcia and the De Rossi of Rome. His early studies were made at the Pious Schools of San Pantaleone, whence he passed to the Roman College.

At the age of sixteen, he resolved to become a secular priest, and on 16 May, 1820, he was ordained. He celebrated his first Mass in the church of the Gesù in Frascati. On 25 July he became a Doctor of Theology, and was soon made a substitute professor of theology in the Roman Archigymnasium. He gave promise of being a distinguished theologian, but decided to dedicate himself entirely to pastoral work. 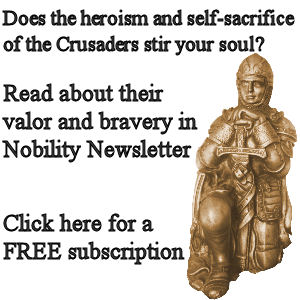 Rome had in him a second Philip Neri. Hearing confessions and preaching were his constant occupations. From morning until night he could be seen hurrying along the streets of Rome to assist at the bedside of the sick in the hospitals, to bring aid and comfort to the poor in their miserable dwellings, or to preach to the unfortunates in prison. Once he went so far as to disguise himself as an old woman in order to reach the bedside of a dying young man, who had a pistol under his pillow ready to kill the first priest who should approach him. During the cholera plague in 1837, Pallotti constantly endangered his life in ministering to the stricken. After a day spent in apostolic labour he was accustomed to pass almost the whole night in prayer, disciplining himself even to blood, and sleeping for a few hours on a chair or on the bare floor. The most distinguished representatives of the Roman aristocracy, bishops, cardinals, and even Popes Gregory XVI and Pius IX honoured him, but the only advantage he took of their friendship was to advocate the claims of the poor. Even as a young man, he often returned home barefooted, after having given away half his clothing in alms; and more than once was he known to have given away his bed to the needy. Leo XIII, who spoke from his personal observations, said he would not hesitate to consider him a saint. Shortly after his death the preparatory examinations for his beatification began; in 1887 he was declared Venerable. 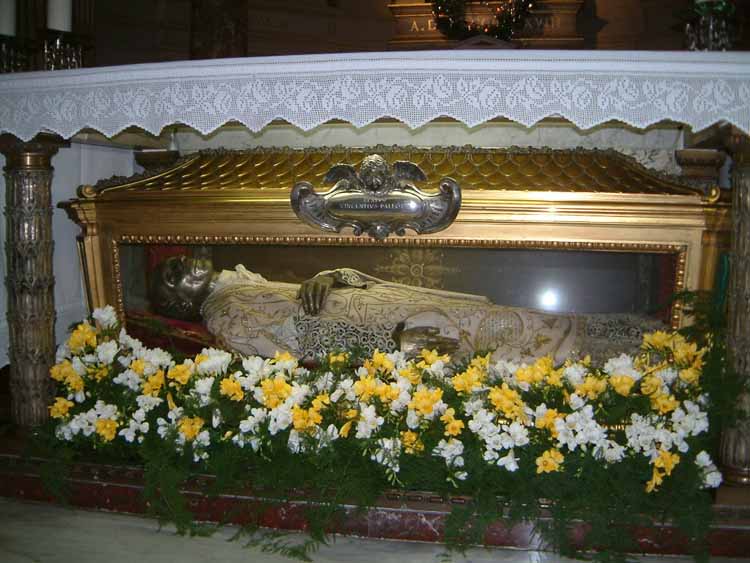 The Incorrupt body of St. Vincent in the Church of San Salvatore in Onda, Rome.

It was Venerable Pallotti who started in 1836 the special observance at Rome of the Octave of the Epiphany. Since then the celebration has been faithfully maintained. Pallotti’s chief desire was to make this observance a means of uniting the dissenting Oriental Churches with Rome.

MELLIA, Vincent Pallotti (London); there is a biography in Italian by ORLANDE (Rome), and in German by the PALLOTTI FATHERS (Limburg).

Posted by Robert Ritchie at 9:47 AM