St. Agnes of Rome – A Child Shall Lead Them

Of all the virgin martyrs of Rome none was held in such high honour by the primitive church, since the fourth century, as St. Agnes.

Painting of St. Agnes of Rome by Alonso Cano Maler

In the ancient Roman calendar of the feasts of the martyrs (Depositio Martyrum), incorporated into the collection of Furius Dionysius Philocalus, dating from 354 and often reprinted, e.g. in Ruinart [Acta Sincera Martyrum (ed. Ratisbon, 1859), 63 sqq.], her feast is assigned to 21 January, to which is added a detail as to the name of the road (Via Nomentana) near which her grave was located. The earliest sacramentaries give the same date for her feast, and it is on this day that the Latin Church even now keeps her memory sacred.

Since the close of the fourth century the Fathers of the Church and Christian poets have sung her praises and extolled her virginity and heroism under torture. It is clear, however, from the diversity in the earliest accounts that there was extant at the end of the fourth century no accurate and reliable narrative, at least in writing, concerning the details of her martyrdom. On one point only is there mutual agreement, viz., the youth of the Christian heroine. St. Ambrose gives her age as twelve (De Virginibus, I, 2; P.L., XVI, 200-202: Haec duodecim annorum martyrium fecisse traditur), St. Augustine as thirteen (Agnes puella tredecim annorum; Sermo cclxxiii, 6, P.L., XXXVIII, 1251), which harmonizes well with the words of Prudentius: Aiunt jugali vix habilem toro (Peristephanon, Hymn xiv, 10 in Ruinart, Act. Sinc., ed cit. 486). Damasus depicts her as hastening to martyrdom from the lap of her mother or nurse (Nutricis gremium subito liquisse puella; in St. Agneten, 3, ed. Ihm, Damasi epigrammata, Leipzig, 1895, 43, n. 40). We have no reason whatever for doubting this tradition. It indeed explains very well the renown of the youthful martyr. 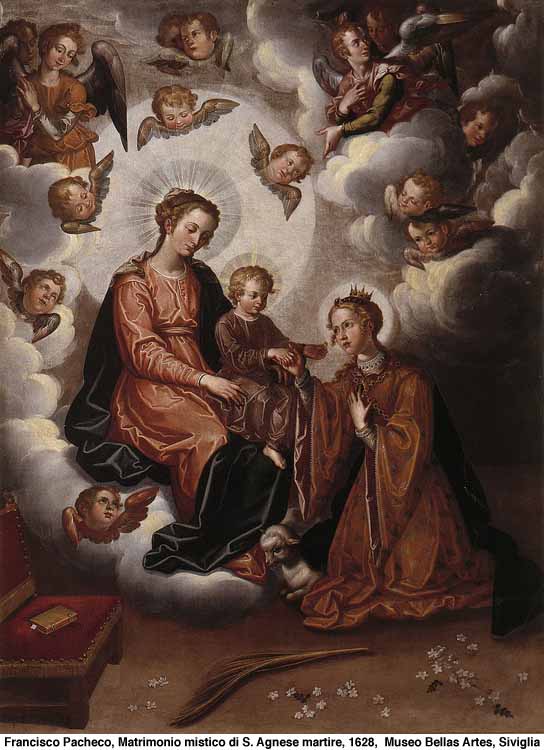 The mystical nuptial of St. Agnes

We have already cited the testimony of the three oldest witnesses to the martyrdom of St. Agnes:

The rhetorical narrative of St. Ambrose, in addition to the martyr’s age, gives nothing except her execution by the sword. The metrical panegyric of Pope Damasus tells us that immediately after the promulgation of the imperial edict against the Christians Agnes voluntarily declared herself a Christian, and suffered very steadfastly the martyrdom of fire, giving scarcely a thought to the frightful torments she had to endure, and concerned only with veiling, by means of her flowing hair, her chaste body which had been exposed to the gaze of the heathen multitude (Nudaque profusum crinem per membra dedisse, Ne domini templum facies peritura videret).

Prudentius, in his description of the martyrdom, adheres rather to the account of St. Ambrose, but adds a new episode: The judge threatened to give over her virginity to a house of prostitution, and even executed this final threat; but when a young man turned a lascivious look upon the virgin, he fell to the ground stricken with blindness, and lay as one dead. Possible this is what Damasus and Ambrose refer to, in saying that the purity of St. Agnes was endangered; the latter in particular says (loc. cit.): Habetis igitur in una hostiâ duplex martyrium, pudoris et religionis: et virgo permansit et martyrium obtinuit (Behold therefore in the same victim a double martyrdom, one of modesty, the other of religion. She remained a virgin, and obtained the crown of martyrdom). Prudentius, therefore, may have drawn at least the substance of this episode from a trustworthy popular legend.

Still another source of information, earlier than the Acts of her martyrdom, is the glorious hymn: Agnes beatae virginis, which, though probably not from the pen of St. Ambrose (since the poet’s narrative clings more closely to the account of Damasus), still betrays a certain use of the text of St. Ambrose, and was composed not long after the latter work. (See the text in Dreves, Aur. Ambrosius der Vater des Kirchengesanges, 135 Freiburg, 1893.) 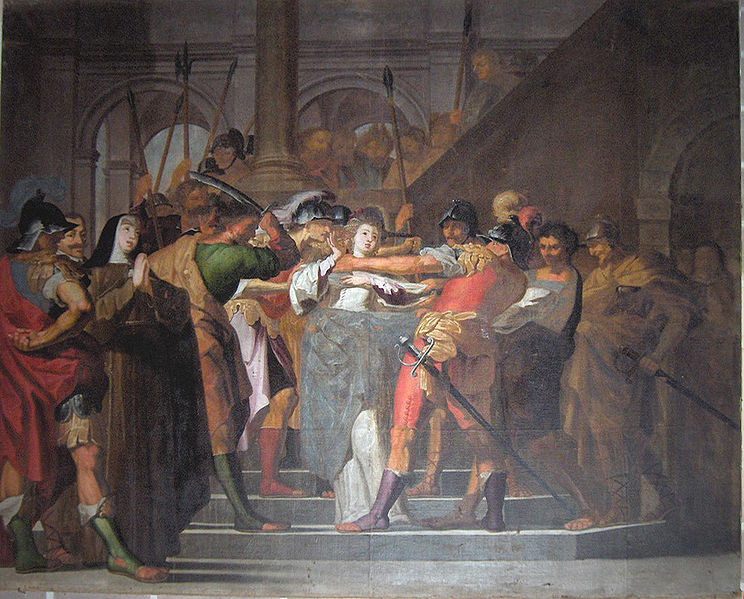 The Martyrdom of St. Agnes of Rome

The Acts of the Martyrdom of St. Agnes

The Acts of the Martyrdom of St. Agnes belong to a somewhat later period, and are met with in three recensions, two Greek and one Latin. The oldest of them is the shorter of the two Greeks texts, on which the Latin text was based, though it was at the same time quite freely enlarged. The longer Greek text is a translation of this Latin enlargement (Pio Franchi de Cavalieri, St. Agnese nella tradizione e nella legenda, in Römische Quartalschrift, Supplement X, Rome, 1899; cf. Acta SS., Jan. II, 350 sqq). The Latin, and consequently, the shorter Greek text date back to the first half of the fifth century, when St. Maximus, Bishop of Turin (c. 450-470), evidently used the Latin Acts in a sermon (P.L., LVII, 643 sqq.). In these Acts the brothel episode is still further elaborated, and the virgin is decapitated after remaining untouched by the flames. 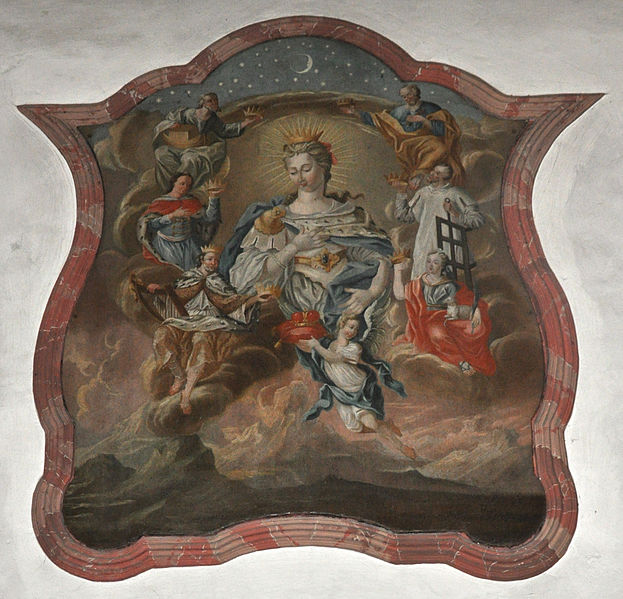 We do not know with certainty in which persecution the courageous virgin won the martyr’s crown. Formerly it was customary to assign her death to the persecution of Diocletian (c. 304), but arguments are now brought forward, based on the inscription of Damasus, to prove that it occurred during one of the third-century persecutions subsequent to that of Decius.

The body of the virgin martyr was placed in a separate sepulchre on the Via Nomentana, and around her tomb there grew up a larger catacomb that bore her name. The original slab which covered her remains, with the inscriptions Agne sanctissima, is probably the same one which is now preserved in the Museum at Naples. During the reign of Constantine, through the efforts of his daughter Constantina, a basilica was erected over the grave of St. Agnes, which was later entirely remodelled by Pope Honorius (625-638), and has since remained unaltered. In the apse is a mosaic showing the martyr amid flames, with a sword at her feet. A beautiful relief of the saint is found on a marble slab that dates from the fourth century and was originally a part of the altar of her church.

Since the Middle Ages St. Agnes has been represented with a lamb, the symbol of her virginal innocence. On her feast two lambs are solemnly blessed, and from their wool are made the palliums sent by the Pope to archbishops.

Posted by Robert Ritchie at 9:37 AM