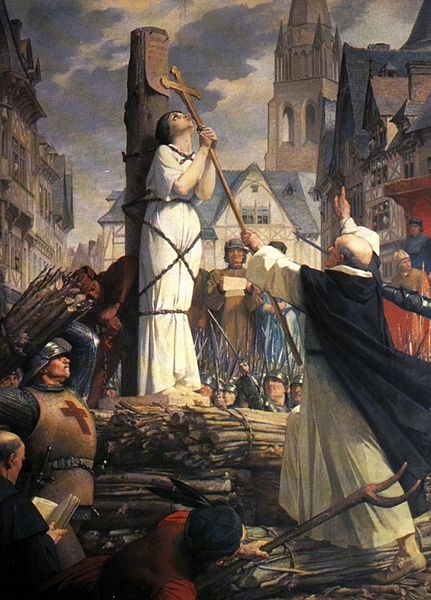 Enveloped in flames, Joan cried out the name of Jesus six times before dying.

With Joan’s death, the way seemed clear for the English to resume their onslaught upon France and sweep to final victory. But it did not happen like that.

In December of that year [1431] the King of England was crowned King of France, but not at Reims. The ceremony took place in Notre-Dame in Paris and it was a mean and shabby affair. It did nothing to extend the English power. The Duke of Bedford’s wife died. She was the Duke of Burgundy’s sister. Bedford married again rather hastily, and Burgundy considered this a slight to his sister’s memory. A coolness sprang up between the two old allies.

In August, 1435, the Congress of Arras was held, at which England, Burgundy, and France met in an attempt to end the war. It failed. The French asked England to renounce forever the title of King of France for her own kings; in return, she could retain almost all Normandy and the kingdom of Guyenne.

They were generous terms, but the English rejected them and, at the end of the year, Burgundy and France allied themselves to drive the English out. In the spring of the following year, French troops entered Paris. Rouen was conquered in 1449…. 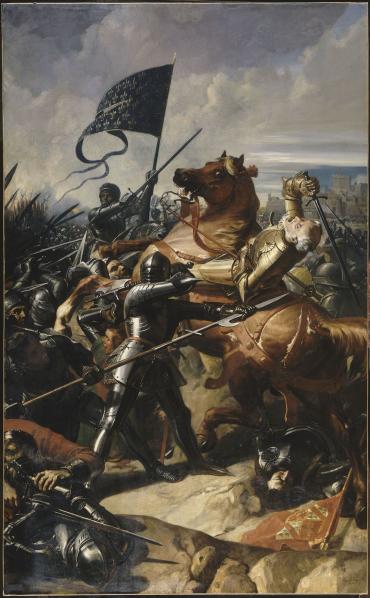 The Death of John Talbot, 1st Earl of Shrewsbury at the Battle of Castillon. Painting by Charles-Philippe Larivière

On June 17, 1452, the town of Castillon, on the Dordogne, was besieged by the French. An English army, commanded by the Earl of Shrewsbury, the famous Talbot who had fought at Orléans against Joan, was sent to its relief. The French won an easy victory and Talbot, badly wounded, died on the field. He was sixty-three; nearly fifty of those years had been spent in fighting the French. Four months later, on October 19, Bordeaux surrendered. The Hundred Years’ War was over and the English were out of France.

Short Stories on Honor, Chivalry, and the World of Nobility—no. 245