The face of a saint: Blessed Tommaso Reggio

Bl. Tommaso Reggio was born in Genoa, Italy, on 9 January 1818 to the Marquis of Reggio and Angela Pareto. He had a comfortable upbringing which gave him a solid Christian and cultural background and assured him of a brilliant career. However, at the age of 20 he decided to become a priest and to turn his back on his previous life. At the time of ordination on 18 September 1841 he said: “I want to become a saint, cost what it may, living my life in accordance with the two cornerstones of Christianity: prayer and ascesis”. 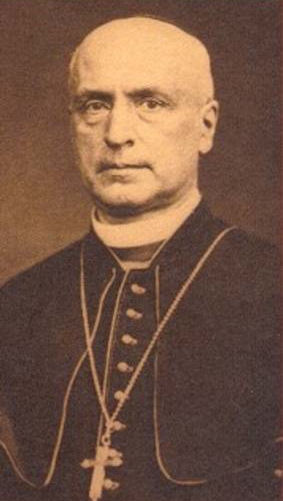 At the age of 25 he was already the vice-rector of the Genoa seminary and later the rector of the Chiavari seminary at a politically turbulent time in the mid-1800s. While in charge of the seminary he became one of the founders of the first Catholic newspaper, The Catholic Standard.

He wanted to report news clearly and honestly. His defense of the Christian faith and its basic principles never got in the way of truth and freedom. In 1865 The Catholic Standard and 25 other newspapers supported Catholic electoral lists. They were hoping for a Catholic political party, but when the Non expedit came out in 1874 and Catholics were told that they could not vote, he realized that his newspaper could not go on. He closed it down without complaint.

In 1877 he was consecrated Bishop of Ventimiglia, a very poor diocese that he was to cross many times on the back of a mule. He was able to feel the pulse of his diocese by visiting even the most inaccessible villages, and organized three Synods in just 15 years. A renovation project was also begun: new parishes were opened, there was a revival of the liturgy and hymns played an important part in the Mass. There were also teaching programs set up for all sectors of the population.

In 1878 the Bishop founded the Sisters of St Martha, a religious order whose purpose was “to meet the requirements of every age”. He gave them the task of welcoming “the poorest of the poor” like Martha, who “served Jesus with her humble hands”.

From him they learned how to worship in silence, to nourish themselves constantly with prayer and to discover “on their knees” the values of a faith whereby Christ can be found in the humblest and in all those with whom he is identified.

In 1887 the diocese was hit by an earthquake. Despite the fact that the Bishop was now elderly, he was actively at work among the rubble. He did not only bless and console but called on his parish priests to make a rigorous and exact check of the gravity of the situation in each parish. His patched cassock and his watch hanging from a piece of string testified that he was a Bishop who had become “poor” for his people.

His main concern was for the orphans whose numbers had increased after the earthquake, so he founded orphanages in Ventimiglia and San Remo, where they could learn a trade and the money they earned was put aside for when they would have to go out into the world alone. In 1892 he asked the Pope to be relieved of his duties. The Holy Father’s answer was surprising: in May 1892 he appointed him Archbishop of Genoa.

He was 74 and his new job was anything but easy given the complex situation in the city of Genoa. The civil authorities were hostile towards him, but he humbly accepted his post, certain of doing God’s will. The Archbishop’s influence was such that eventually Catholics and non-believers brought their problems to him, as one would to a good and wise father. 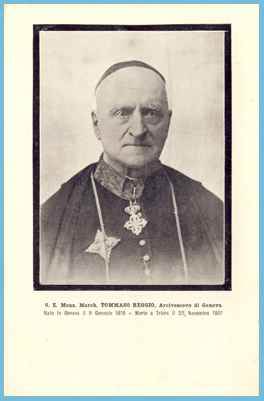 With Bishops Bonomelli and Scalabrini he set up an assistance network for immigrants which supplied them with documents to prevent any exploitation. Catholic associations were encouraged and he supported reduced work hours and weekends off for laborers, which soon gained him the admiration of his adversaries.

He would pray every night from 3 a.m. until 6 a.m. Cheerful and carefree, he made no show of his penitential life. He worshiped Christ and knew how to hide his problems and labors behind a cheerful and humorous appearance. He had an unshakable faith and a natural humility which sustained his life.

In 1900 Catholic Italy decided to consecrate the new century to God and Our Lady. The Archbishop invited all the Ligurian Bishops to Ventimiglia for a pilgrimage to Monte Saccarello, where a statue of the Redeemer was erected. Although he very much wanted to go up the mountain, he took ill and was unable to do so. He died on the afternoon of 22 November 1901.