A “Pastoral of Mercy” or Ambiguity Regarding Sin? 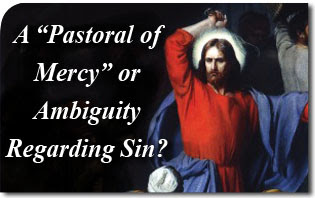 Some months ago, the Vatican sent Bishops’ Conferences around the world a questionnaire with several questions of a moral nature.

Tragic loss of the sense of sin

The result could only be the one expected: the world’s bishops responded that young people marry less and less and live in concubinage; that the number of divorces is alarming; and that divorced Catholics ‘remarried’ in civil unions are so unaware of their state of sin that they do not understand why they cannot receive Holy Communion. Likewise, they made ​​clear that tolerance for homosexual practice and even same-sex partnerships and “marriages” is increasing.

In the final analysis, the responses to the questionnaire simply reveal a tragic loss of a sense of sin and its consequences for eternal life.

This is due, above all, to an almost complete disappearance of belief in hell with its eternal punishments. And the very notion of sin loses its meaning when people no longer believe in a post-mortem punishment for serious transgressions of divine law and that dying in the state of mortal sin leads to hell.

Nor does God’s Law, the Ten Commandments, make any sense without those beliefs. For if there is no punishment for disobeying a law, it is not law but merely a guideline that a person may follow or not without consequences.

The need for a thorough examination of conscience

Thus, the result of this survey on the general state of morality among Catholics should lead the bishops to make a profound examination of conscience to find out how we have arrived at this extreme situation. Could there have been some error in the pastoral policy of the last fifty years, not based on preaching opportune et inopportune(“in season and out of season” - 2Tim. 4:2) about sin and its consequences but rather on “dialogue with the world”?

Judging by the Instrumentum Laboris, the document prepared as a guide for the bishops at the Synod on the Family to be held this coming October, the trend is not to change the current pastoral policy. Instead, given the answers to the survey, the opposite is to be feared: further increasing what has been done over the last five decades despite the obvious failure of this approach.

Neither hell nor sin, only mercy

Indeed, the document does not mention Hell even once; and its four references to sin are made only in passing, without analyzing its essence and without pointing out its consequences. There is no reference to sin as an offense to God or to what sin means for our life on this earth and after. Nor is there any insistence on conversion, that is, profound repentance and the avoidance of sin and near occasions of sin.

The document’s emphasis is on mercy(a popular word today) which appears nine times in the text. An example of what the document appears to understand as mercy can be read in n. 92:

“[T]he Church needs to equip herself with pastoral means which provide the possibility of her more widely exercising mercy, clemency and indulgence towards new unions.”

The document does not present persons separated from their legitimate spouses and in new unions as living in an objective situation of sin but merely as being in an “irregular” canonical situation (Nos. 89-94). But this sweetened designation is watered down even more later on: they find themselves in a “so-called ‘irregular’ situation”(No. 138).

By deeming irregular unions (that is adulterous ones) as a mere “canonical irregularity” the document fails to take into account the objective state of sin such people are in and the scandal and temptation they cause for other believers.

The Instrumentum Laboris presents couples in “irregular” (or “so called ‘irregular’”) situations as members of the Church without any restriction due to their objectively sinful and scandalous situation.

“A good number of episcopal conferences,” the document says, “recommend assisting people in canonically irregular marriagesnot to consider themselves as ‘separated from the Church, for as baptized persons they can, and indeed must, share in her life’ (FC, 84)” (n. 92).

A sinner is a dead member of the Church

There is no doubt that someone in a state of sin who has not fallen into heresy, schism or apostasy still belongs to the Church. But they are bad members, dead branches, tenuously attached to the tree of life. As Charles Cardinal Journet explains, sinners belong to the Church “in virtue of what remains pure and holy in them.” “But,” he adds, “in virtue of the mortal sin…they belong chiefly to the world and to the devil. ‘He who commits sin is of the devil’ (1 John 3:8).”1A fortiori,the same applies to him who lives in the state of mortal sin without a firm resolution to get out of this situation.

These are truths that must be remembered and taught to Catholics who are in this sinful situation. One of the spiritual works of mercy is precisely to “admonish the sinner” (cf. Col. 3:16).

“[T]hey are to be esteemed for the love and courage with which they welcomed the life conceived in their womb and now provide for the upbringing and education of their children” (n. 88).

Admittedly, one must support and help these girls and even praise them for having had the courage not to abort. However, one must speak out about the moral problems that led to their single motherhood.

We must emphasize that, except in cases of physical or moral violence, the loss of virginity outside of marriage is a sin.

In fact, one of the causes of single motherhood, which increasingly spreads throughout the world, is sexual promiscuity among teens, which in turn is a consequence of the general decline of morality in society, with the quasi-abandonment of the practice of chastity and the loss of love for virginity.

Is merely praising such single mothers, without recalling what was said above, an effective way to restore the practice of chastity and to strengthen marriage and the family, which is precisely the goal of the next synod?

A “non-judgmental” attitude toward homosexuality

One of the most pressing moral and social issues today is undoubtedly the spread of homosexuality and the imposition of laws that not only favor it but persecute those who oppose the vice against nature.

Although the working document does mention the stalwart 2003 statement by the Congregation for the Doctrine of the Faith (Considerations regarding Proposals to Give Legal Recognition to Unions between Homosexual Persons) on the topic, here too it fails to talk about sin and falls into ambiguity.

For example, on the countries that have imposed same-sex “marriage,” it says:

“The episcopal conferences amply demonstrate that they are trying to find a balance between the Church's teaching on the family and a respectful, non-judgmentalattitude towards people living in such unions” (n. 113). And later on: “In countries where legislation exists on civil unions, many of the faithful express themselves in favor of a respectful and non-judgmentalattitude towards these people and a ministry which seeks to accept them” (n. 115).

Now then, it is proper for Catholics, and especially for Shepherds to judge human acts according to morals. While it is true that the Church does not judge people’s hearts (de internis nec Ecclesia), their external actions are susceptible of judgment. If this were not possible, man would have a dichotomy between his inner life and his external actions, which would be an absurdity.

At one point the working document hints at the possibility of a change in Catholic doctrine regarding homosexual practice.

Thus, it mentions without criticism that some bishops’ conferences “admit a certain unease at thechallenge of accepting these people with a merciful spiritand, at the same time, holding to the moral teaching of the Church,all the while attempting to provide appropriate pastoral care which takes every aspect of the person into consideration” (n. 116).

“A Pastoral of Mercy”?

Presenting Instrumentum Laboristo the press, Lorenzo Cardinal Baldisseri, Secretary of the Synod on the Family, insisted on the aspect of mercy to the point that some Catholic publications titled their stories:

“Cardinal Baldisseri: ‘It is urgent to allow wounded persons to heal and find mercy,’” Periodista Digital announced on the same date.

For its part, the Vatican Insider of the same date, headlined: “Synod of Bishops: Church must be merciful with the divorced, same-sex couples and teen mothers.”

It is cruel to speak of mercy without mentioning divine justice and the seriousness of sin or reminding sinners of the terrible pains of hell if they do not repent and forsake their sins. As the saying attributed to Saint Thomas goes, “Justice without mercy is cruelty, and mercy without justice leads to ruin.”

According to Saint Augustine, mercy is a virtuous act, “to the extent that the movement of the soul is obedient to reason;” therefore, “let mercy be done without violating justice.”2

The language of the Prophets

St. John the Baptist showed mercy to Herod by telling him, “It is not lawful for thee to have her [your brother’s wife]” (Matthew 14:4). And the prophet Nathan was merciful to King David by rebuking him for stealing the wife of Urias (2 Samuel, chapters 11-12).

A repentant David wrote one of the most beautiful expressions of a soul crying out to God for mercy:

The language of the Prophets should be the language of our Shepherds in this calamitous situation in which Catholic faithful find themselves.

The above-mentioned loss of the sense of sin is not new but comes from far back. In 1946, speaking specifically to Americans, Pope Pius XII said: “Perhaps the greatest sin in the world today is that men have begun to lose the sense of sin.” In the same speech, the regretted Pontiff recalls “God’s horror of sin.”3

Since then, this loss of the sense of sin has done nothing but skyrocket.

1 Charles Journet, The Church of the Word Incarnate, Vol. I, p. xxvii.