Saint Louis de Montfort tells the story of a young girl of noble station named Alexandra, who had been miraculously converted and enrolled by St. Dominic in the Confraternity of the Rosary.

Click here for your Free Picture of Our Lady of Fatima 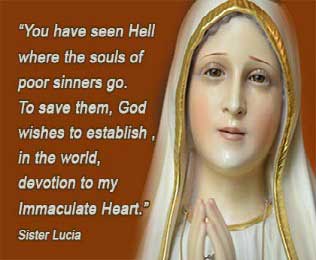 After her death, she appeared to him and said she had been condemned to seven hundred years in purgatory because of her own sins and those she had caused others to commit by her worldly ways. So she implored him to ease her pains by his prayers and to ask the Confraternity members to pray for the same end. St. Dominic did as she had asked.

Two weeks later she appeared to him, more radiant than the sun, having been quickly delivered from purgatory by the prayers of the Confraternity members. She also told St. Dominic that she had come on behalf of the souls in purgatory to beg him to go on preaching the Rosary and to ask their relations to offer their Rosaries for them, and that they would reward them abundantly when they entered into glory.

Click here for your Free Picture of Our Lady of Fatima