Attacks on the Swiss Cross in Switzerland! 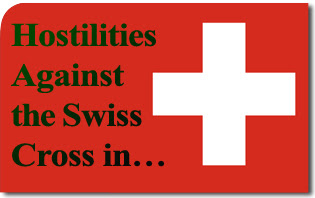 At a school in Emmen in the Swiss canton of Lucerne, students were asked to beautify some concrete walls. In fact, more than 1,000 inhabitants of the locality have participated in similar initiatives in the past seven years.

The plan was sponsored by Emmenfarbig (Emmen in Color), an association directed by Peter Jans and was to have children paint musical instruments on a wall.

“Some of the children had the idea to paint a Swiss flag with an alpenhorn,” Peter Jans told newspapers according to the Geneva daily La Tribune de Genève.

The children’s initiative caused a whole storm to break out. Unwilling to hurt the sensitivity of immigrants, the school board panicked and decided to cancel the event.

The Swiss Flag Forbidden in Its Own Country?
Peter Jans was ordered to fill in the cross of the national flag painted on the wall, leaving only a red background. So he asked the town’s city council to clarify whether the Swiss flag could be painted in the future.

Students, parents and teachers reacted strongly. The president of the municipality, Rolf Born tried to calm people down by saying that “personally, I see no problem with the Swiss cross at school.”

He rebutted the accusation by pro-immigrants that painting the national symbol — the Swiss cross — had political and racist overtones or incited violence.

The Observatory of Christianophobia noted that already in 2011 a group of Muslim immigrants had demanded that Switzerland suppress the cross from its national flag. Their pretext was that it offended Islamic sensibilities. The request was not accepted.

But this problem is apparently widespread in Switzerland. According to The Observatory of Christianophobia, in a vile spirit of submission and “Christianophobia”, reputable Swiss companies are taking the Swiss cross off their logos. The Observatory published photos of famed Tissot watches without the brand’s traditional cross, identical to the national flag’s; Swatch watches, worn worldwide, also without the Swiss cross; and Victorinox knives, very famous for many decades, also without the cross. Victorinox is the official supplier of the Swiss army and creator of the celebrated pocket knives with many different uses.

For The Observatory, this is a source of concern since it represents a victory that gradually predisposes Switzerland to accept a regime of “dhimmitude”.

Dhimmitude is the Koran-inspired regime imposed on enslaved Christians which requires them to pay taxes in humiliating conditions, forbids them to live a kind of life that could somehow seem better than the lives of Koran followers, and punishes them for possessing a cross or owning a pig as if both were equally reprehensible acts!