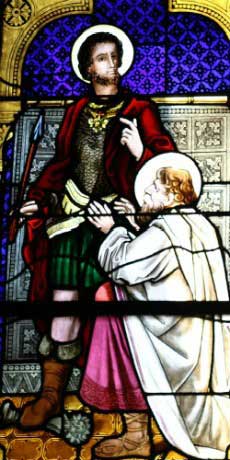 Chromatius was brought up in the city of Aquileia, at the head of the Adriatic Sea. In all likelihood, he was probably born here as well. His father died when he was young, and he lived with his widowed mother, older brother and unmarried sisters. His mother had the good opinion of St. Jerome, which the saint expressed in a letter to her in 374. His brother also became a bishop.

After his ordination, Chromatius took part in the synod against Arianism in 381. Later, as bishop, he rooted Arianism out of his diocese.

He baptized the monk, theologian, and historian, Rufinus in his early manhood.

On the death of St. Valerian in 388, Chromatius was elected bishop of Aquileia, and became one of the most distinguished prelates of his time.

Situated at one of the busiest crossroads of the Roman Empire, Aquileia was a major center of trade and commerce. Under Chromatius' care, guidance and influence it also became renowned as a center of learning and orthodoxy.

He kept up an extensive correspondence with both Sts. Ambrose and Jerome and also with Rufinus.  A scholarly theologian himself, Chromatius encouraged the Bishop of Milan to write exegetical works, and St. Jerome in his own writings. He helped St. Heliodorus of Altino to finance St. Jerome’s translation of the Bible.  It was also owing to Chromatius’ encouragement that Rufinus undertook the translation of Eusebius’ Ecclesiastical History and other works.

He acted as mediator in a dispute that arose between St. Jerome and Rufinus concerning the writings of Origen. He also wrote to Emperor Honorius in defense of St. John Chrysostom, Bishop of Constantinople, over his troubles with the bishop of Alexandria and the Empress Aelia Eudoxia, who resented Chrysostom’s denouncements of extravagance. Though Honorius wrote to his brother Emperor Arcadius in Constantinople, the intervention had no effect.

Chromatius was also an active exegete. Seventeen of his treatises on St. Matthew’s Gospel survive, as well as a fine homily on the Eight Beatitudes. Chromatius died about the year 407.
Photo Credit: GFreihalter