Missionary to the Muslims and Hammer of Heretics

Franciscan Thaumaturgist, born at Lisbon, died at Vercelli in 1231. He received in baptism the name of Ferdinand. 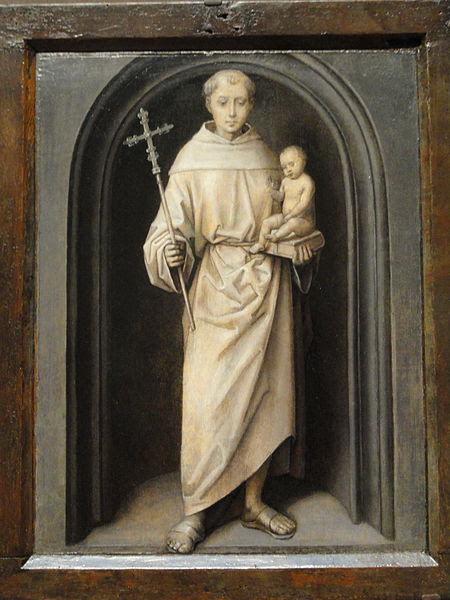 Saint Anthony of Padua by Hans Memling at the Art Institute of Chicago.

Later writers of the fifteenth century asserted that his father was Martin Bouillon, descendant of the renowned Godfrey de Bouillon, commander of the First Crusade, and his mother, Theresa Taveira, descendant of Froila I, fourth king of Asturia. Unfortunately, however, his genealogy is uncertain; all that we know of his parents is that they were noble, powerful, and God-fearing people, and at the time of Ferdinand’s birth were both still young, and living near the Cathedral of Lisbon.

Having been educated in the Cathedral school, Ferdinand, at the age of fifteen, joined the Canons Regular of St. Augustine, in the convent of St. Vincent, just outside the city walls (1210). Two years later to avoid being distracted by relatives and friends, who frequently came to visit him, he betook himself with permission of his superior to the Convent of Santa Croce in Coimbra (1212), where he remained for eight years, occupying his time mainly with study and prayer. Gifted with an excellent understanding and a prodigious memory, he soon gathered from the Sacred Scriptures and the writings of the Holy Fathers a treasure of theological knowledge.

In the year 1220, having seen conveyed into the Church of Santa Croce the bodies of the first Franciscan martyrs, who had suffered death at Morocco, 16 January of the same year, he too was inflamed with the desire of martyrdom, and resolved to become a Friar Minor, that he might preach the Faith to the Saracens and suffer for Christ’s sake. Having confided his intention to some of the brethren of the convent of Olivares (near Cóimbra), who came to beg alms at the Abbey of the Canons Regular, he received from their hands the Franciscan habit in the same Convent of Santa Croce. Thus Ferdinand left the Canons Regular of St. Augustine to join the Order of Friars Minor, taking at the same time the new name of Anthony, a name which later on the Convent of Olivares also adopted.

A noble is oriented to service and sacrificing himself for the common good. Thus, countless nobles have died on the battlefield, defending their king and homeland.

True to his noble ancestry, St. Anthony of Padua, did just this, not as a warrior but as a Franciscan friar. The heroism, however, was just the same.

As this post recounts, the first time he offered to lay his life down was as a missionary to the Muslims in Northern Africa.  The risk of death was very real, the proof being the bodies of the first Franciscan martyrs, whose burial St. Anthony had witnessed in Portugal.

The second time, was when he confronted the tyrant Ezzelino to request the freedom of his prisoners.

As for war, St. Anthony excelled at a higher war than that fought out on the physical battlefield: the war against heresy. It earned him the encomium “Hammer of the Heretics” and ranks him by analogy next to one of History’s most famous warriors, Charles Martel (“the Hammer”) who defeated the Muslims in the battle of Tours.