The Nobility of the Holy Family & Prayer to Saint Joseph 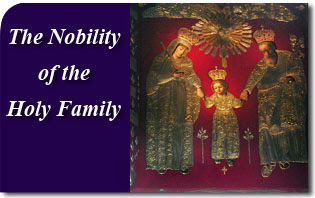 Mary, Joseph, and
Therefore Jesus, Were
Born of Royal Stock

Taken from a sermon of Saint Bernardine of Siena (1380-1444) about Saint Joseph:

Firstly, let us consider the nobility of the bride the Most Holy Virgin. The Blessed Virgin was nobler than any other creature that had been born in human form that could be or could have been begotten. For Saint Matthew in his first chapter, thrice enumerating fourteen generations from Abraham to Jesus Christ inclusive, shows that she descends from fourteen Patriarchs, fourteen Kings, and fourteen Princes…. Saint Luke also, writing on her nobility in his third chapter, proceeds in his genealogy from Adam and Eve until Christ God….

Secondly, let us consider the nobility of the bridegroom Saint Joseph. He was born of Patriarchal, Royal and Princely stock in a direct line as has been said. For Saint Matthew in his first chapter established a direct line with all the aforementioned fathers from Abraham to the spouse of the Virgin, clearly demonstrating that all patriarchal, royal and princely dignity come together in him….

Prayer to Saint Joseph for the October Devotions
Ordered by Pope Leo XIII to be said as Part of the Devotions for the Month of October.

To Thee, O blessed Saint Joseph, we have recourse in our afflictions, and after imploring the help of thy most holy Spouse, we confidently invoke thy patronage. By that affection which united thee to the Immaculate Virgin Mother of God, and by the fatherly love with which thou didst embrace the Infant Jesus, look down, we beseech thee with gracious eyes on the precious inheritance, which Jesus Christ purchased by His blood and help us in our necessities by thy power and aid. Protect, O most provident guardian of the Holy Family, the elect children of Jesus Christ; ward off from us, O most loving father, all plagues of errors and depravity; be propitious to us from heaven, O most powerful protector, in this our struggle with the powers of darkness; and as thou didst once rescue the Child Jesus from the greatest peril to His life, so now defend God’s holy Church from the snares of the enemy and all adversity.

Finally, shield every one of us with thy patronage, that by imitating thy example and strengthened by thy help, we may live a holy life, die a happy death and attain to everlasting happiness in heaven. Amen.

Pope Leo XIII, September 21, 1887. An Indulgence of 300 days, applicable to the souls in Purgatory, seven years and seven quarantines for each public recital during the month of October.