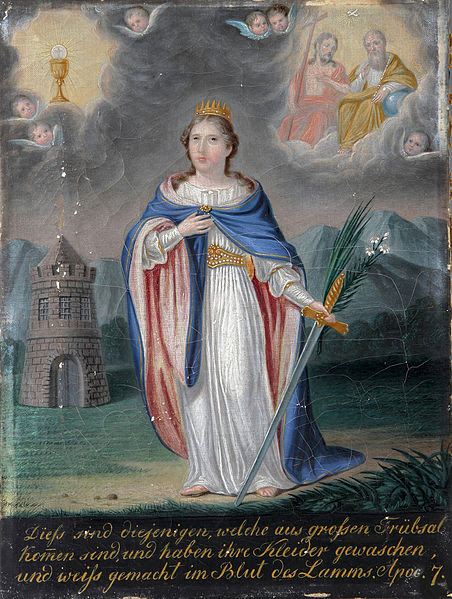 Virgin and Martyr. There is no reference to St. Barbara contained in the authentic early historical authorities for Christian antiquity, neither does her name appear in the original recension of St. Jerome’s martyrology. Veneration of the saint was common, however, from the seventh century.

At about this date there were in existence legendary Acts of her martyrdom which were inserted in the collection of Symeon Metaphrastes and were used as well by the authors (Ado, Usuard, etc.) of the enlarged martyrologies composed during the ninth century in Western Europe. According to these narratives, which are essentially the same, Barbara was the daughter of a rich heathen named Dioscorus.

She was carefully guarded by her father who kept her shut up in a tower in order to preserve her from the outside world. An offer of marriage which was received through him she rejected. Before going on a journey her father commanded that a bath-house be erected for her use near her dwelling, and during his absence Barbara had three windows put in it, as a symbol of the Holy Trinity, instead of the two originally intended. 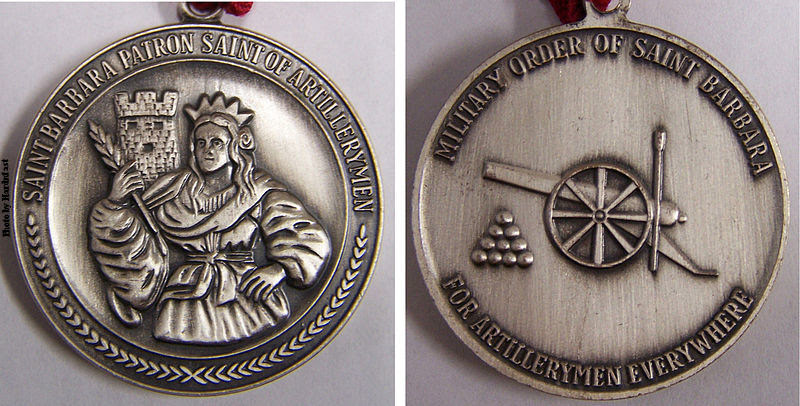 When her father returned she acknowledged herself to be a Christian; upon this she was ill-treated by him and dragged before the prefect of the province, Martinianus, who had her cruelly tortured and finally condemned her to death by beheading. The father himself carried out the death-sentence, but in punishment for this he was struck by lightning on the way home and his body consumed. Another Christian named Juliana suffered the death of a martyr along with Barbara. A pious man called Valentinus buried the bodies of the saints; at this grave the sick were healed and the pilgrims who came to pray received aid and consolation. The emperor in whose reign the martyrdom is placed is sometimes called Maximinus and sometimes Maximianus; owing to the purely legendary character of the accounts of the martyrdom, there is no good basis for the investigations made at an earlier date in order to ascertain whether Maximinus Thrax (235-238) or Maximinus Daza (of the Diocletian persecutions), is meant. 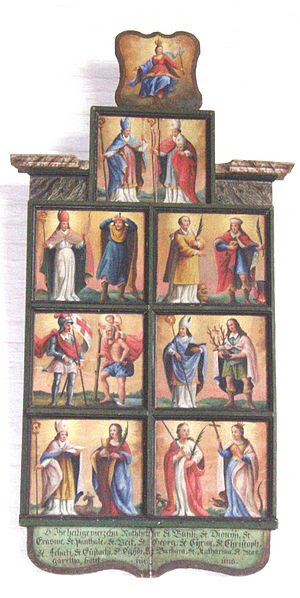 St. Barbara is one of the Fourteen Holy Helpers, because of their intercession against various diseases. Devotion to them originated in the 14th century at first in the Rhineland, as a result of the epidemic known as the Black Plague. Though each Saint has their own feast day, collectively their feast day is August 8th. The Basilica of the Fourteen Holy Helpers is located in Bavaria.

The traditions vary as to the place of martyrdom, two different opinions being expressed: Symeon Metaphrastes and the Latin legend given by Mombritius makes Heliopolis in Egypt the site of the martyrdom, while other accounts, to which Baronius ascribes more weight, give Nicomedia. In the “Martyrologium Romanum parvum” (about 700), the oldest martyrology of the Latin Church in which her name occurs, it is said: “In Tuscia Barbarae virginis et martyris”, a statement repeated by Ado and others, while later additions of the martyrologies of St. Jerome and Bede say “Romae Barbarae virginis” or “apud Antiochiam passio S. Barbarae virg.”. These various statement prove, however, only the local adaptation of the veneration of the saintly martyr concerning whom there is no genuine historical tradition. It is certain that before the ninth century she was publicly venerated both in the East and in the West, and that she was very popular with the Christian populace. 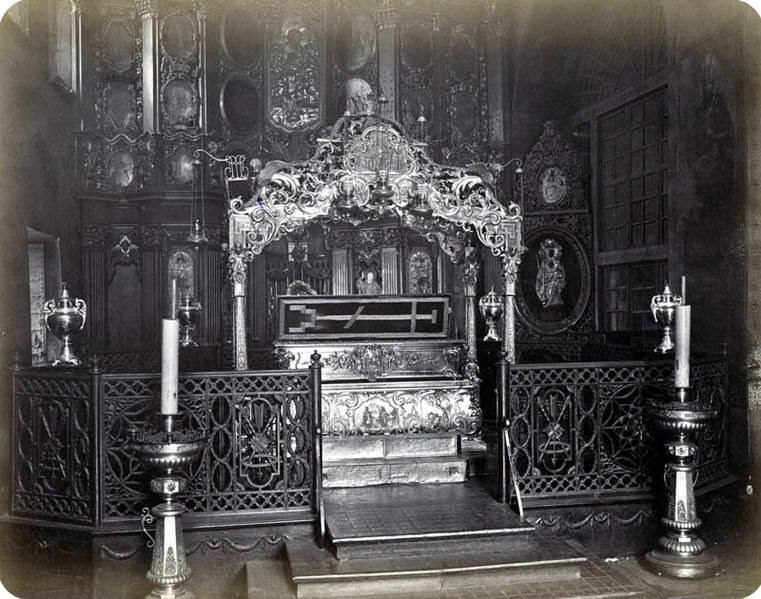 In the 12th century, the relics of Saint Barbara were brought from Constantinople to the St. Michael's Golden-Domed Monastery in Kiev, where they were kept until the 1930s, when they were transferred to St. Vladimir's Cathedral in the same city.

The legend that her father was struck by lightning caused her, probably, to be regarded by the common people as the patron saint in time of danger from thunder-storms and fire, and later by analogy, as the protector of artillerymen and miners. She was also called upon as intercessor to assure the receiving of the Sacraments of Penance and Holy Eucharist at the hour of death. An occurrence of the year 1448 did much to further the spread of the veneration of the saint. A man named Henry Kock was nearly burnt to death in a fire at Gorkum; he called on St. Barbara, to whom he had always shown great devotion. She aided him to escape from the burning house and kept him alive until he could receive the last sacraments. A similar circumstance is related in an addition to the “Legenda aurea”. In the Greek and present Roman calendars the feast of St. Barbara falls on 4 December, while the martyrologies on the ninth century, with exception of Rabanus Maurus, place it on 16 December. St. Barbara has often been depicted in art; she is represented standing in a tower with three windows, carrying the palm of a martyr in her hand; often also she holds a chalice and sacramental wafer; sometimes cannon are displayed near her. 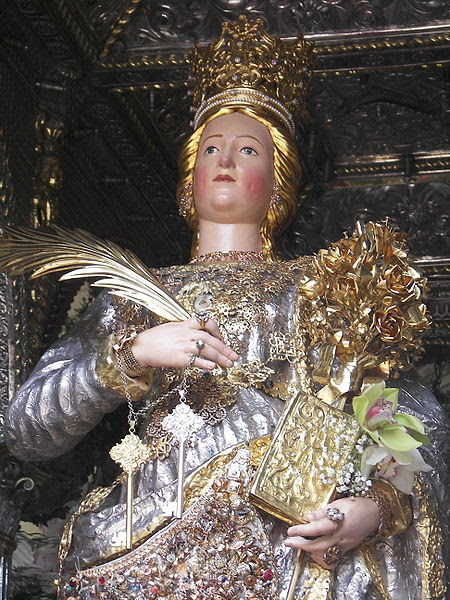 Statue of St. Barbara in Paterno, Sicily. She is Paterno's Patron Saint, along with St. Vincent.