St. Aengus, called “God’s Vassal” was of the royal house of Ulster, and was born around the middle of the seventh century. As a young man he entered the Monastery of Clonenagh, which under its holy abbot Maelaithgen was famous for its learning, sanctity and numerous followers. At Clonenagh Aengus advanced so rapidly that there came a day when it was said that none in Ireland rivaled Aengus in knowledge and virtue. 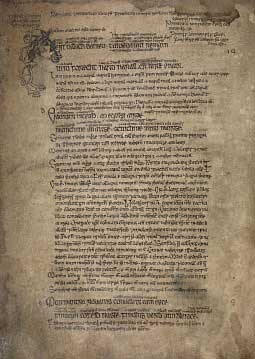 Desiring to abandon the world entirely, Aengus retired to an isolated hermitage where he practiced severe mortifications. These, in turn, began to attract all manner of people to his “desert”. So, one night, he simply disappeared. Knocking at the door of the great monastery of Tallaght in Dublin, he asked to be admitted as a servant – concealing both his name and renown. He was accepted by the abbot, St. Maelruain, and for seven years labored at the meanest chores about the monastery, none suspecting his true identity.

One day as he worked in the barn, a little boy who did not know his lesson, and was playing truant from the monastery school sought shelter in the granary. Aengus befriended him, and by the time the lad left the barn yard he knew his lesson perfectly. The fact came to the attention of Abbot Maelruain, who divined that his chore-boy was the missing great teacher Aengus. Relieved of his menial work, Aengus went on to write the metrical hymn known as the Félire Óengusso or The Martyrology of Oengus the Culdee.

After the death of St. Maelruain, he returned to Clonenagh where he appears to have been made abbot and to have been raised to episcopal dignity.

As he felt his end approaching, he withdrew again to solitude where he finished his Félire, and perhaps other works now lost. The exact date of his death is not known but it is thought that he lived to a great age.
Posted by America Needs Fatima at 9:28 AM