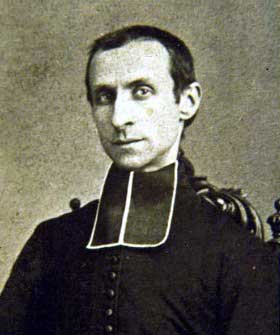 Leonard Murialdo was born in 1828 into a wealthy, but religious, family in Turin, Italy. The eighth child in a large family, he was only four years old when he lost his father.

During his adolescent years, Leonard went through a profound spiritual crisis and an interior conversion during which period he discovered his vocation to the priesthood. He received an excellent education and seminary formation, completed his studies in philosophy and theology at the University of Turin, and was ordained a priest in 1851.

As a seminarian he had begun assisting his cousin, Don Roberto Murialdo, at the Guardian Angels Oratory in Turin and it was through him that he came to work closely with two other saints: St. Joseph Cafasso and St. John Bosco. For a time, at the latter’s request, the young priest took charge of the Oratory of St. Louis, one of Don Bosco’s educational centers for boys at the edge of the city.

He went on to take charge of a college for young working men founded by another exemplary priest, Don Giovanni Cocchi, and although taking on the daunting assignment hesitantly, and only “provisionally”, he remained at this post for the next thirty-seven years. Partly to fund the college, he founded the Pious Association of St. Joseph. From Turin this association spread throughout Italy and then to America. Leonard also founded agricultural centers for young delinquents, another field in which he was an innovator.

He was a great proponent of true social justice, and was ecclesiastical assistant to the Catholic Workers’ Union, a forerunner of Catholic Action. He was equally dedicated to the spread of piety, particularly devotion to the Sacred Heart of Jesus and to the Blessed Virgin Mary.

He died on March 30, 1900 and his remains rest in the Church of St. Barbara in Turin.
Posted by America Needs Fatima at 9:55 AM