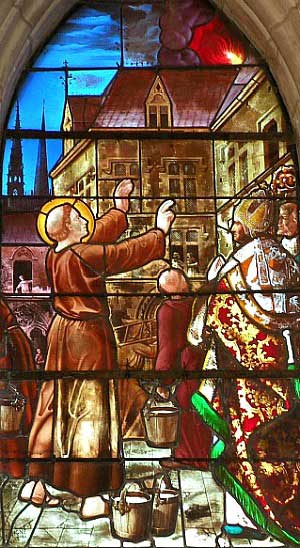 Lubin’s parents were peasants from the region of Poitiers in France. As a young boy, Lubin had an aptitude for learning and applied to a monastery where he was employed in menial tasks. His work occupied him the entire day, and he was obliged to do most of his studying at night, screening his candle as best he could. The monks complained that the light disturbed their slumbers, but by much humility and perseverance Lubin advanced in knowledge.

He eventually joined the monastery and, probably at the suggestion of St. Carilef, for a time lived as a hermit under the guidance of St. Avitus. Later, after some misadventures, he settled in an abbey near Lyons, remaining for five years.

In a war between the Franks and the Burgundians this monastery was raided and all the monks fled with the exception of Lubin and an old monk. The enemy, unable to extort from Lubin the location of the monastery’s "treasure", tortured him by first strangling him with a rope and then by tying his feet and dipping him, head first, into the river. Left for dead, he recovered, and was received in the monastery of Le Perche.

Bishop Aetherius of Chartres nominated Lubin the Abbot of Brou and had him ordained to the priesthood. His responsibility as abbot weighed so heavily upon him that he begged – although in vain – to be relieved of it. Instead, upon the death of the bishop, he was elevated and consecrated in his place. He brought about various reforms and became renowned for his miracles. Lubin participated in the Fifth Council of Orleans and in the Second Council of Paris, and died on March 14, about the year 558, after a long illness.
Photo by: Chatsam
Posted by America Needs Fatima at 10:06 AM