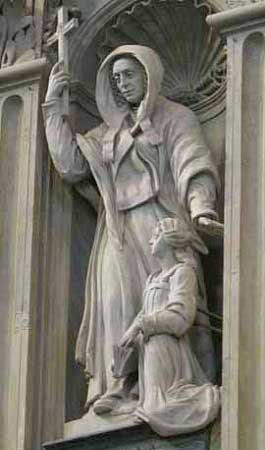 Lucy was born in 1672 in Tarquinia in Tuscany. Orphaned early in life, she was raised by her aristocratic aunt and uncle.

Her early inclination to piety was strengthened by a great seriousness of purpose and her remarkable gifts attracted the attention of the Cardinal-Bishop of the diocese, Marcantonio Barbarigo, who persuaded the young lady to take advantage of an institute for training teachers in Montefiasconi. Lucy excelled in the institute and won all hearts by her modesty and charity, her intense conviction of spiritual things, her common sense and her courage.

At the teachers' institute, Lucy met Blessed Rose Venerini, whose educational experience Cardinal Barbarigo had likewise recruited. In Montefiascone the two holy women trained schoolmistresses and co-founded the Maestre Pie or the Pious Matrons. Together they trained girls in the art of running a good home, weaving, embroidery, reading and Christian doctrine. Their work prospered. Both shared a tremendous gift for effective communication.

In 1707, at the express desire of Pope Clement XI, Lucy went to Rome and founded the first school of the Maestre Pie. The school flourished and children flocked to it from all over the region. Though only able to remain in Rome for six months, when Lucy left the Eternal City she was known as the “Maestra Santa”, the Holy School Mistress.

Unfortunately, the task sapped Lucy’s strength and she became seriously ill in 1726. Though she had good medical care, she never quite regained her health and died a most holy death on March 25, 1732, the day she had predicted.
Posted by America Needs Fatima at 9:05 AM