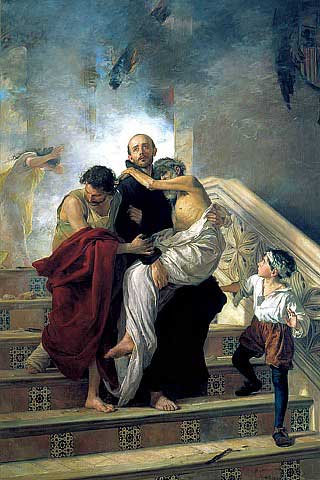 John of God was born of pious parents in 1495 in Montemoro Novo in northern Portugal. Obscure circumstances led to him being absconded from his parents into Spain at the age of nine to be raised by a farmer.

Pleased with his pious character and diligence the farmer insisted that John marry his daughter, whom John viewed as a sister. Unwilling to do so, he enlisted in the army of Emperor Charles V and served in the wars between France and Spain and later against the Turks.

In the army John took on the loose lifestyle of soldiers for which his upright character would later bitterly reproach him.

On leaving the army he made a trip to Portugal in an attempt to find his parents. News of his mother’s premature death after his mysterious disappearance saddened him.

Succeeding years find him engaged in different occupations first in Seville, then Gibraltar and later in Africa, to ransom with his own liberty the Christians held captive by the Moors. At the advice of his confessor he returned to Spain and began selling religious books and pictures as a form of apostolate.

Around this time John, who was now about forty, had a vision of the Infant Jesus holding an open pomegranate (in Spanish “Granada”), Who said to him, “John of God, Granada will be your cross.”

Proceeding to the city of Granada, John was struck to the heart by a sermon of St. John of Avila. Entering a period of intense remorse for his sins, he went about as if deranged beating his breast and calling out for God’s mercy. St. John of Avila convinced him to desist from his lamentations and to take up another method of penance to atone for his past life.

He then made a pilgrimage to the shrine of Guadeloupe where the Blessed Virgin revealed to him his vocation. On returning to Granada, John of God dedicated his life to the care of the sick and poor. After renting a house, he searched the city for the homeless and afflicted with all sorts of diseases and carried them on his shoulders to shelter. Soon others joined him in the endeavor.

Though St. John of God never officially founded an order in his lifetime, his work was later constituted into the Order of the Hospitallers of St. John of God.

John of God died exhausted by his labors on behalf of the abandoned of society and died on his knees before an altar on March 8, 1550 at age fifty-five. The whole of Granada, rich and poor, the powerful and the weak attended his funeral.
Posted by America Needs Fatima at 10:42 AM