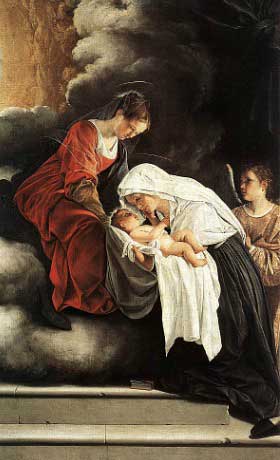 Frances was born in Rome in 1383, the daughter of noble, wealthy and pious parents. At eleven she asked to become a religious but only met with point blank refusal. A year later, the attractive, precocious girl was betrothed to Lorenzo Ponziano, a young man of good character, fortune and position. Frances submitted.

At first, married life was trying for the thirteen-year-old. One day Vannozza, her sister-in-law, found her weeping. To France’s surprise Vannozza revealed that she also would rather have been a religious. Thus was born a life-long friendship.

The two friends drew out a program for virtuous living amidst their social duties; they began to pray together, and to visit the sick in Rome. Their husbands supported them against wagging “social” tongues.

Frances and Lorenzo had three children: John Baptista, Evangelist and Agnes. Despite their privileged position, Frances would hear of none other caring for them.

Being supporters of the true Pope against the antipope during the great schism, the Ponzianis suffered through war, imprisonment and pillage of their estate. Frances’ husband was seriously wounded but recovered under her care, and her boy Baptista was taken hostage but was miraculously delivered.

During a pestilence young Evangelist died and Frances turned part of the house into a hospital.  God rewarded her labors with the gift of healing. In a vision she saw Evangelist accompanied by an Archangel. He revealed to his bereaved mother that Agnes was also soon to die, but as a consolation she would have the Archangel as her visible companion for twenty-three years. In the last part of her life she was to have an angel of even higher dignity.

By this time the fame of France’s virtues and miracles had spread throughout Rome and her assistance was sought from all quarters. With the full support of both her husband and her confessor she formed a society of women living in the world but dedicated to serving God and the poor. After seven years, they felt the need to establish a community house to which Frances retired after her husband’s death.

Frances died on the evening of March 9, 1440 saying: “The angel has finished his task: he beckons me to follow him.”
Posted by America Needs Fatima at 11:20 AM