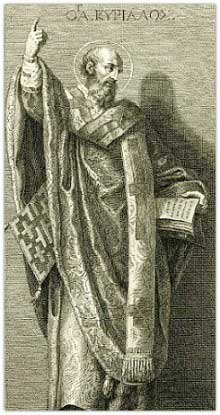 Though Cyril’s birthplace is unknown, he was certainly brought up in Jerusalem. His parents, very probably Christians, gave him an excellent education.

St. Jerome relates that Cyril was ordained to the priesthood by St. Maximus, the Bishop of Jerusalem, who thought so highly of Cyril's teaching that he was charged with the important duty of instructing the catechumens. Nineteen of these catechetical discourses, delivered without a book, have come down to us. These are invaluable as an exposition of the teaching and ritual of the Church in the fourth century.

Upon the death of St. Maximus, Cyril was elected to his episcopal see. Not long after his consecration as Bishop of Jerusalem, however, misunderstandings arose between Cyril and Bishop Acacius because of the latter’s leanings to Arianism – a heresy that denied the divinity of Christ. He was summoned before a council convened by Acacius but refused to appear. Accused of rebellion, and of distributing Church goods to the poor – which he justifiably did – Cyril entered a crucible of suffering through persecution.

His life as bishop was plagued with charges by the Arians and consequent exiles by Arian-supporting emperors. Sixteen of the thirty-five years of his episcopate were spent in exile. With the accession of Emperor Theodosius he was recalled and ruled undisturbed for the last eight years of his life.

Cyril participated in the great Council of Constantinople, when the Nicene Creed was promulgated in its amended form. He is thought to have died in 386 around the age of seventy. He was declared a Doctor of the Church in 1882.
Posted by America Needs Fatima at 10:03 AM