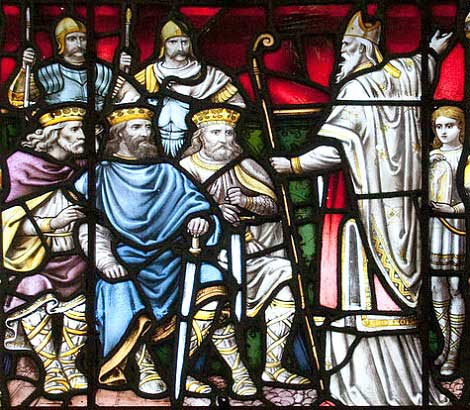 Patrick of Irish fame was born in Kilpatrick, Scotland in 387 to Christian parents of means and position. At the age of sixteen Patrick was abducted and sold into slavery. In Ireland he worked as a shepherd in the service of the chieftain Milchu of Dalriada, who was also a Druid high priest. Alone with the sheep, young Patrick developed a deep prayer life. Referring to this period of his life in his “Confessio” he writes: “… and the faith grew in me, and the spirit was roused …”

Patrick became acquainted with the Celtic language, and with the ways of the Druids, a knowledge that was to be crucial to his effectiveness in ridding Ireland of pagan Druidism.

Led by an angel, after six years Patrick fled captivity, walked 200 miles to the sea and boarded a ship, ultimately returning to his people.  They begged him to remain, but Patrick felt the call to dedicate his life to God. He spent time in the monastery of St. Martin de Tours and on the island sanctuary of Lérins and was ordained a priest by his mentor, the great St. Germain.

But the “voices” of Ireland called out to Patrick to return. Commended to Pope St. Celestine by St. Germain, Patrick received the commission to bring the green isle into the fold of Christ.

Returning to Ireland, Patrick proceeded to win over the pagan chieftains, druids and ultimately the king by his daring, meekness, miracles and inspired teaching. The tradition of a three-leafed shamrock originated in  the fact that he held the shamrock up before the Irish chieftains as he explained the doctrine of the Holy Trinity of three divine Persons in one God.

Before the apostle’s faith, ardent fervor and miracles, druid magic melted away and druid strongholds succumbed. As Patrick and his companions announced the glad tidings of Redemption, Ireland was cloaked in the green mantle of new hope and faith.

After wrestling with paganism, Patrick wrestled with God in prayer and penance, obtaining from Him great blessings for Ireland and was granted to be the judge of Ireland on the Last Day. Before his death, he was also granted a vision in which he saw the light of the Catholic faith shining in Ireland for many centuries, then dimming to the point of only prevailing in certain areas, then growing and glowing again.

Patrick died on March 17 having spent forty years in preaching the Gospel in Ireland.
First Photo by: Andreas F. Borchert
Shamrock Emblem by: Setanta Saki
Posted by America Needs Fatima at 9:55 AM