A Letter from Above

Young Lady Jane was as sweet as she was lovely. Being the daughter of a prince, the whole world lay before her, full of possibilities.
At a young age, Jane chose the road less traveled, that of giving her life to her Savior as His bride. With her parents’ blessing she entered a monastery, not too distant from her ancestral home. Sadly, the discipline of this monastery was so relaxed, that, although she was a young person of good intentions, she advanced but little in virtue.
But her Divine Spouse watched over Jane and sent her a blessing in the form of a holy confessor. This devout man of God recognized Jane’s plight – though she herself did not – and with all seriousness implored her to pray a Rosary every day. With youthful enthusiasm Jane took her confessor’s advice to heart and she began to say the Rosary, daily thinking about the mysteries as she prayed. This simple devotion caused her to become so changed that she was an example to all.
Unfortunately, her fervor pricked the consciences of those who enjoyed the laxity allowed in the monastery. The other religious, taking offence at her for withdrawing from them, attacked her on all sides, to induce her to abandon her newly-begun way of life. 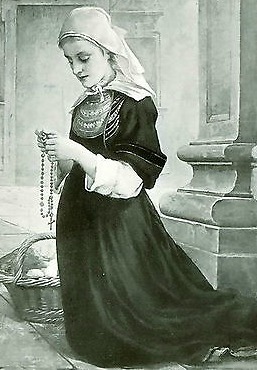 One day while she was repeating the Rosary, and praying to Mother Mary to assist her in this persecution, she saw a letter fall from above. The paper was of purest white, feeling almost silky to Jane’s touch. The script flowed along the page as if it were dancing the most elegant of dances. On the outside were written these words: "Mary, mother of God, to her daughter Jane, greeting;" and within :

"My dear child, continue to say my Rosary ; withdraw from conversation with those who do not help you to live well ; beware of idleness and vanity ; take from your cell two superfluous things, and I will be your protectress with God."
The young nun kept her letter close and read it often. More importantly, she followed her Mother’s gentle advice to the letter and continued to hold fast in the face of persecution. It is no small thing to remain close to Our Lady while being deprived of human companionship, but Jane did all within her power to please her “protectress.”
It was not long before the abbot of that monastery paid a visited. Seeing the lack of discipline and virtue among the majority of its inhabitants, he attempted to reform it, but did not succeed. One day, to his horror, he saw a great number of demons entering the cells of all the nuns, except that of Jane. Drawing closer to the favored cell, the abbot came upon Jane kneeling before an image of Our Lady. At one glance the abbot could see that same heavenly mother banishing the demons from Jane’s cell.
He quietly withdrew and entered the gardens to pray for guidance. After a time, he called the young nun to his side, asking her the most general questions about her life in the monastery and her religious practices. When he heard from her of the devotion of the Rosary which she practiced, and the letter she had received from above, everything became clear. He now had a sure means of reform for the entire monastery! He ordered all the others to repeat it, and it is related that this monastery soon became a paradise under the gentle gaze of its protectress.
From the Glories of Mary, by St. Alphonsus Maria de Liguori.
Posted by America Needs Fatima at 2:17 PM