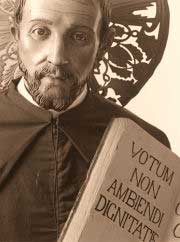 On October 15, 1563 Francis Caracciolo was born into a noble Italian family. When he was twenty-two, he developed a skin disease similar to leprosy. The disease was incurable, but Francis vowed that if he was healed, he would dedicate his life to God and the service of others. He quickly recovered after his vow and the healing was reported to be miraculous.

Francis then became a priest, and on June 1, 1588, officially began the Minor Clerks Regular, an order that combined the active with the contemplative life. Some of the priests and brothers lived in hermitages, devoting themselves entirely to prayer and contemplation, but the others worked mainly as missionaries and attended to those in hospitals and prisons.

Though he was opposed to filling the post himself, Francis eventually became superior. For seven years he remained in this position, all the while taking his turn maintaining household tasks. He founded houses in Madrid, Valladolid and Alcala before being allowed to retire in 1607 that he might prepare himself for death.