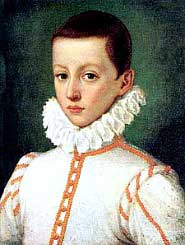 Aloysius was born in the Italian province of Lombardy in 1568, the first-born son of a Marquis and the lady of honor to the Queen of Spain. When he was seven, he experienced a spiritual awakening: he made a vow of perpetual virginity, keeping his eyes downcast in the presence of women to safeguard himself from possible temptation, and dedicated most of his time to prayer, especially the Office of Our Lady.

When he was just eleven years old he fasted in the manner of a monk, eating only bread and water three days a week, practiced austerities and taught poor children the catechism. The next year, he received his First Holy Communion from the hands of the great saint and cardinal, Charles Borromeo. 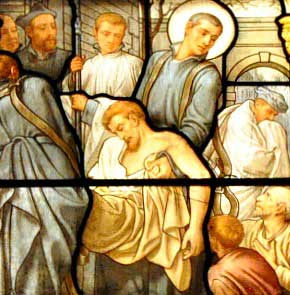 By age fourteen, Aloysius had resolved to join the Society of Jesus and become a missionary. He was to suffer much from his family's strenuous opposition to this decision, particularly from his father, who hoped Aloysius would join the military. However, he persevered, and his father finally relented.

In 1585, the seventeen-year-old Aloysius was admitted into the Jesuit novitiate in Rome where he took the vows of chastity, poverty, and obedience two years later. While the young Gonzaga was ordained a deacon at twenty, he was never to realize his dream of becoming a priest and missionary in this life.

As had been foretold to him in a vision, Aloysius died on the octave of Corpus Christi in 1591 after contracting the plague while caring for the sick in the Jesuit hospital. He was twenty-three years old. He was canonized in 1726 and his relics remain under the altar dedicated to the Jesuit founder in the Church of St. Ignatius in Rome. The virtue that had so marked him in his youth – purity – and which he preached and practiced to a heroic degree during his short life, became the spiritual crown by which he will be forever known.
Second Photo by: Philippe Alès
Posted by America Needs Fatima at 9:28 AM