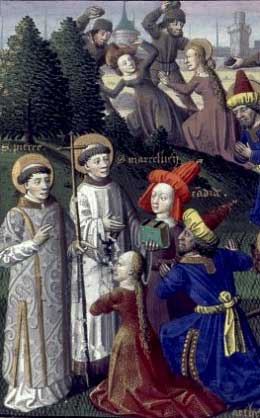 Although not much is known about these two early martyrs, we do know that Marcellinus was a priest in Rome and Peter was an exorcist who worked in close association with him. They were both renowned for their zeal and piety and attracted many followers to Christ.

About the year 304, during the persecution of Diocletian, the two holy men were arrested for the practice of their faith. Whilst in prison, and awaiting sentencing, Marcellinus and Peter not only confirmed and helped strengthen the faith of the other Christians imprisoned with them, but they also made new converts, including their jailer and his wife and daughter, who later became martyrs themselves.

In the hopes that the Christians might not know of their execution and that their example of courage and faith be forgotten, a secret order was passed by the judge. Marcellinus, Peter and the other Christians were one day led into a thicket in the woods several miles out of Rome, called Silva Nigra, where they were beheaded in secret after cheerfully clearing away the thorns and briars to prepare their own burial places.

Some time after, a pious lady named Lucilla was shown by divine revelation the place of the holy martyrs death and burial, and she and another devout lady by the name of Firmina took the bodies and interned them in the Catacombs where they could be duly venerated. Pope Damascus himself assures us that, as a child, he learned all these particulars from the mouth of the executioner himself, who was also later converted.
Posted by America Needs Fatima at 10:06 AM