Charles Lwanga was one of twenty-two Ugandan martyrs who were converted from paganism by the Society of Missionaries of Africa. Chief of the royal pages, Charles eventually became a moral leader: he protected the other pages from the immoral demands of the Babandan ruler, Mwanga, and instructed them in the Catholic Faith, even baptizing some of them. He inspired and encouraged his companions to remain chaste and to be faithful to God even through imprisonment and persecution. 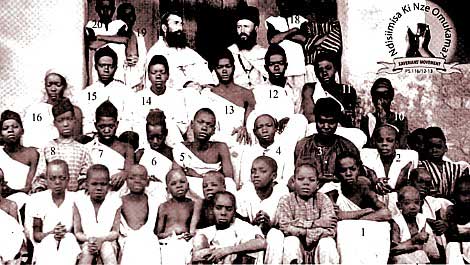 When Mwanga began to see the Catholics as a threat to his rule, he sentenced them to death. He ordered his pages into a great room and ordered the Catholics to separate themselves from the rest. Then he asked if they intended to remain true to their faith, even when faced with persecution. “Until death!” they responded.

On June 3, 1886, the converts were tortured and burned alive. Soon persecution spread, and more and more Catholics were sacrificing their lives rather than deny Christ. The twenty-two martyrs were solemnly beatified in 1920 and canonized in 1946.
Posted by America Needs Fatima at 9:32 AM