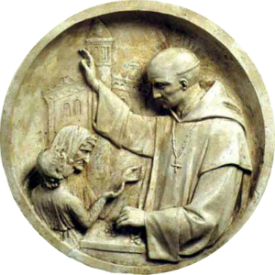 Anthelm was born in 1107 near Chambéry, France. He was a good and generous man, but more materialistic than a priest ought to be. His eyes being opened to this spiritual defect while visiting the Charterhouse of Portes, he underwent an interior conversion. Requesting admission to the order, he was vested in the habit of St. Bruno in 1137.

Only two years after joining the order, he became the seventh Prior of the Grande Chartreuse. His growing reputation for wisdom and holiness attracted many to the order, including his own father and brother.

The salutary effect of his influence was also felt during the Schism of 1159 when western Christendom was divided. One group favored the claims of the true pope, Alexander III, the other supported the antipope, "Victor IV.” His work for the papal cause gained him the bishopric of Belley, though the holy man longed for nothing more than a monastic cell.  He fervently, even tearfully, pleaded with the Pope not to appoint him bishop, but to no avail, and in 1163, he was consecrated bishop over the diocese of Belley.

Until his death in 1178 at the age of seventy-two, Anthelm fearlessly reprimanded the clergy for their fallen standards concerning priestly celibacy and labored tirelessly and uncompromisingly for the reform of the clergy.
Posted by America Needs Fatima at 9:11 AM