The Apostolic Strategy Against Modernism

The Nineteenth Century: Ravished
by Modernism and Rationalism

It is not easy for someone today to have a clear idea of the devastation which rationalism and modernism wrought on European and American society throughout the nineteenth century.

At that time, the human soul had been profoundly worked over by materialists and revolutionaries of all sorts; man felt within itself a burning revolt against everything supernatural. This led many, including Catholics, to shun what could not fall directly under the action and the control of the senses. The Catholic religion, with its highly visible supernatural character, was quarantined from public opinion. People sought as much as possible to be free from beliefs which could not be rigorously examined in a laboratory.

It is no exaggeration to say that rationalism and modernism infected nine-tenths of all Europeans. And while this contamination did not effect everyone equally, had inundated popular thought so much that these terrible forms of heresy could be noticed even amongst eminent Catholics.

The Adverse Reaction of Public Opinion
Public opinion took four positions in face of the great religious crisis of the time.

First, there were the extremists who were deeply corroded by the viruses of rationalism and modernism and attracted to the extremes of irreligion, radical atheism, and militant anti-clericalism.

Second were those who did not have the courage to break with all religious belief but were formally outside the Church. They believed in a sort of vague Christianity or spiritualism, much adapted to rationalist principles.

Third were those who lacked the courage to break with either the Church or the spirit of the century. These declared themselves to be Catholics, but held the right to profess a few doctrines contrary to the Church.

Fourth were those who had not even the courage to admit they disagreed with the Church, but who sought to interpret Catholic doctrine according to their whims. These last would change some points of authentic traditional teaching in order not to conflict with the errors of the day.

Unfortunately, those who entirely rejected the spirit of the century and who kept themselves free of any blemish of rationalism or modernism were so few that they could be counted on the fingers of one hand. This was especially so in intellectual circles and high society.

The Church in a Great Dilemma
Thus the Church was like an immense edifice that was falling apart. Very few of the millions of Her children kept Her true spirit. Most Catholics had only the remnants of Faith without any horizons. They kept the last flickering light, like the last vestiges of a day nearing its end. The total darkness of the night was not far off.

In face of this crisis how should the Church proceed? Opinions were divided. The problem was very delicate and needed to be handled with utmost wisdom.

On one hand, a clear and defined reaction would foment fierce opposition. It would plunge many souls still more or less linked to the Church into explicit heresy. On the other hand, if a formal and categorical dike was not raised against the heresy it would assume such proportions that the Church would soon experience the greatest anguish of Her existence.

A Solution Is Found
Blessed Pius IX opted for an energetic reaction and decided to call a Vatican Council to study the proclamation of the dogmas of Papal Infallibility and the Immaculate Conception. To some it was a grand gesture of daring by a 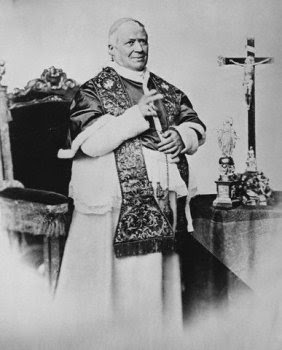 Inspired by grace, Blessed Pius IX
proclaimed the dogmas of Papal Infallibility
and the Immaculate Conception, dealing a
blow to the modernist and rationalist
revolutionaries of the time.

Church confronting the spirit of the century; to others it was a foolhardy challenge.

Even to speak of dogmas at all was audacious. Defining new ones took even greater daring. However, defining the Immaculate Conception and Papal Infallibility as dogmas in a tremendously rationalist and democratic epoch seemed to verge on madness!

As expected, an immense uproar broke out among Catholics when the intentions of the Pope became known. Opposition was so strong that almost the whole French episcopate opposed the definition of those two dogmas of the Faith.

Why? Did they disagreed with them? No. They believed the erring souls of the nineteenth century could only be won back to the fold by smiling, concessions and tolerance. Not audacious blows, but constant affability converts the masses. It would be complete madness to challenge the spirit of the age. With this attitude of daring, all the estranged would be confirmed in their errors. Only the tactic of concession would work.

Vatican Council I
The Church gathered its bishops at the Vatican Council. Illuminated by the Holy Spirit, it discussed this great problem of strategy as well as the doctrines of infallibility and the Immaculate Conception. It was perhaps the first time since the Council of Trent that this strategic problem was presented for such vigorous examination by the bishops.

To the bishops, facts seemed to prove right the fears of the concessionist viewpoint. A great uproar broke out all over Europe. Apostasies multiplied. The discussions in the Council were long and passionate.

Three questions needed to be answered before proceeding with Blessed Pius IX’s proposals:

1.  Would a vigorous gesture intended to preserve the masses from error really safeguard those not yet contaminated?
2.  Would this gesture exasperate vacillating souls and push them into formal heresy?
3.  Would it not confirm in error those individuals who could be brought back to the truth by gentle persuasion?

To the first question the council answered Yes.  To the others No.

The Initial Result: Disaster
The aftermath of the Vatican Council at first suggested Blessed Pius IX had made a great tactical mistake. Revolt against the Church was open and declared. Someone angry with the dogma of the Immaculate Conception assassinated the archbishop of Paris in his cathedral. Rivers of ink were poured out trying to prove the Council was backward and obscurantist. Ruy Barbosa wrote his famous attack on the Council, The Pope and the Council.

At Last...Triumph
However, the results hoped for by the Council were not long in coming. In the first place, all militant Catholics gave their unconditional adhesion. In the hearts of the people the truths defined by the Church were accepted thanks to the vigor with which the Church promulgated them. Even the intellectual circles respected the Pope for his decisiveness and vitality. Rationalism and modernism gradually decayed within the Church. She had smashed with Her vigorous authority the dragon that had threatened to devour Her.

Today, nobody could deny the long-term impact of this historic event. But there are those who still condemn such vigorous manifestations of Faith. The same ones always judge it counter-productive for the children of light to show any gesture of energy or combativeness towards the children of darkness. This was the formidable and definitive triumph of Pius IX.