The Archbishop of Westminster's Strange Defense of Marriage 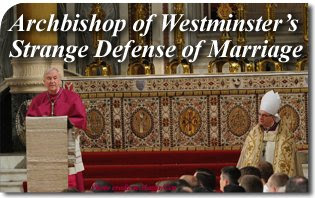 The homosexual movement’s most intensely sought goal is to present male and female homosexual acts as normal.

In order to do so, its mentors try to create a context of equality between the homosexual act and heterosexual intercourse (the only act that can fulfill the specific goal of replacing humanity through procreation).

“Marriage” vs. Homosexual “Partnerships”
Thus, in the name of a nonexistent equality between homosexuality and heterosexuality, the homosexual movement struggles all over the world to establish so-called homosexual “marriage,” “partnerships,” or “unions.”

The Church, faithful to natural law and Revelation, cannot accept as lawful an act which is both against nature and the finality of the sexual act; and therefore cannot approve either homosexual “marriage” or “partnerships.”

That is why on July 31, 2003 the Vatican Congregation for the Doctrine of the Faith published the document, “Considerations Regarding Proposals To Give Legal Recognition To Unions Between Homosexual Persons,” which clearly stated this position and was signed by then Cardinal Joseph Ratzinger, now Pope Benedict XVI.1

Liberal Bishops Support “Partnerships”
Nevertheless, from time to time, some cardinal or bishop comes out with a statement favoring homosexual acts or unions, thus contradicting the immutable doctrine of the Church.2

The latest scandal in this line is the statement of Catholic Archbishop of Westminster, Vincent Nichols, who defended homosexual “partnerships” in the name of human equality. Asked about it later, the high-ranking prelate explained that in doing so he was actually defending heterosexual marriage! 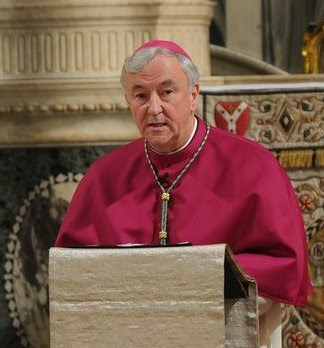 Archbishop Vincent Nichols of Westminster has made statements opposed to natural law and Catholic doctrine on several occasions.

“We would want to emphasize that civil partnerships actually provide a structure in which people of the same sex who want a lifelong relationship [and] a lifelong partnership can find their place and protection and legal provision,” the archbishop said. “As a Church we are very committed to the notion of equality so that people are treated the same across all the activities of life.”

However, the archbishop also explained that the same equality that permits a “partnership” does not allow homosexual “marriage”.3 It is not clear why the same logic would not apply.

Asked about his statements by the Catholic News Agency (CNA), Archbishop Nichols replied that he was defending marriage but also avoiding “being accused of being homophobic.” Asked whether he was not going against Vatican guidelines, the prelate answered that the bishops have tried “to recognize the reality of the legal provision in our country of an agreement, a partnership, with many of the same legal safeguards as in marriage.”4

Surprisingly, he also affirmed — as if to justify himself — that unlike marriages, homosexual partnerships “have no root in a sexual relationship!”5 Such a statement makes it difficult to determine on what planet the Archbishop of Westminster lives! 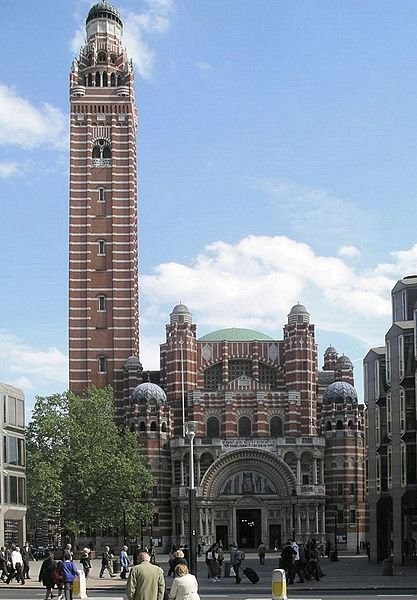 As the spiritual head of Catholics in England and Wales it is highly perplexing to see Archbishop Nichols cast doubt on the immutable moral doctrine of the Church.

This is not the first time Archbishop Nichols has made absurd statements opposed to natural law and Catholic doctrine.

In 2010, during a debate on the BBC, answering a homosexual’s accusation that the Church opposes the agenda of the homosexual movement, he said, “That’s not true. In this country, we were very nuanced. We did not oppose gay civil partnerships.”6

It is highly perplexing to see a Catholic bishop cast doubt on the immutable moral doctrine of the Church. He is the leader of the Church in England and Wales! What can the Catholic faithful expect from such leadership? Will the archbishop receive some kind of punishment?

Let us pray that he will.

Add this page to your favorite Social Bookmarking websites

1. Cf. http://www.vatican.va/roman_curia/congregations/cfaith/documents/rc_con_cfaith
_doc_20030731_homosexual-unions_en.html. [back]
2. Cf. Luiz S. Solimeo, “Should the Church Change Her Position on Homosexuality and Divorce?” at http://www.tfp.org/tfp-home/catholic-perspective/should-the-church-change-her-position-on-homosexuality-and-divorce.html, and idem; “The Liberal Media’s Offensive and the Church’s Internal and External Enemies,” at http://www.tfp.org/tfp-home/catholic-perspective/the-liberal-medias-offensive-and-the-churchs-internal-and-external-enemies.html. [back]
3. “Archbishop praises civil partnerships,” at http://www.thetablet.co.uk/pdf/5348. [back]
4. David Kerr, “Archbishop Nichols responds to critics of his civil unions approach,” at http://www.catholicnewsagency.com/news/archbishop-nichols-responds-to-critics-of-his-civil-unions-approach/. [back]
5. Ibid. [back]
6. Hilary White, “On Tape: Top UK Catholic Bishop: We Fight Poverty not Gay Unions” at http://www.lifesitenews.com/news/archive/ldn/2010/sep/10092404. [back]
7. Neil Tweedie, “Archbishop of Westminster: ‘Pope Benedict is a man of real poise, with an inner peace’” at http://www.telegraph.co.uk/news/religion/7995510/Archbishop-of-Westminster-Pope-Benedict-is-a-man-of-real-poise-with-an-inner-peace.html, also http://www.lifesitenews.com/news/archive/ldn/2010/sep/10091401. [back]
8. See “Archbishop Vincent Nichols on women priests and gay unions” at http://www.youtube.com/watch?feature=endscreen&NR=1&v=BShswBfhOhI. [back]
Posted by Robert Ritchie at 10:24 AM