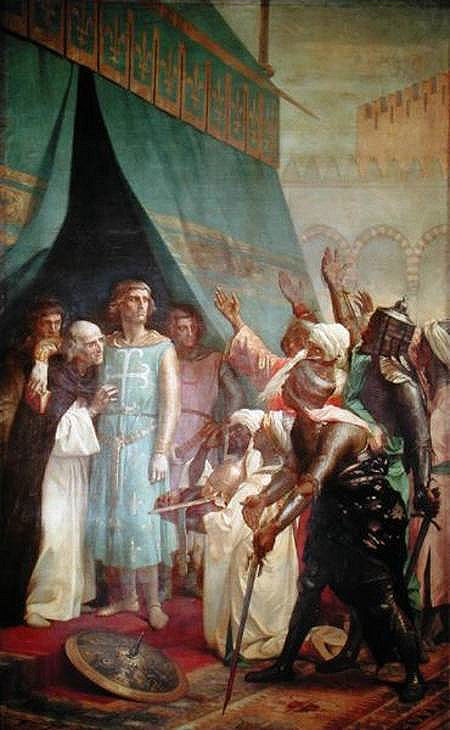 The Life of St. Louis by Alexandre Cabanel

For the sultan [Ayub], the capture of the king and his great vassals seemed to offer a magnificent opportunity to complete the conquest of the Frankish possessions in the Holy Land which had been started by his father….

So the negotiations which, after several attempts at intimidation (the sultan had threatened the king with torture), had got under way between the victor and the vanquished, took a new turn….

These dealings were not to the liking of the leaders of the Egyptian army, who feared that having rid himself of the prisoners, the sultan would next try to get rid of them.… Thus, on 2 May, a conspiracy in which the Mameluk emirs joined, resulted in the assassination of the young sultan.

The Franks went through a sticky period; the sultan’s assassins threatened them with death, and the knights, as they waited, confessed to each other. The leader of the plot, the emir Aqtai, penetrated the tent housing St. Louis and demanded that the king make him a knight as a reward for having got rid of his enemy. St. Louis replied that knighthood could only be conferred on a Christian, and asked Aqtai to embrace the Christian faith. Things might have gone badly had not the other emirs arrived. They assured the king that they intended to stick to the terms of the treaty. The barons were brought and, on the morning of 3 May, the agreement earlier suspended was confirmed.

Short Stories on Honor, Chivalry, and the World of Nobility—no. 138