This Saintly Prince Preached Sanctity in Marriage and Chastity in Priesthood 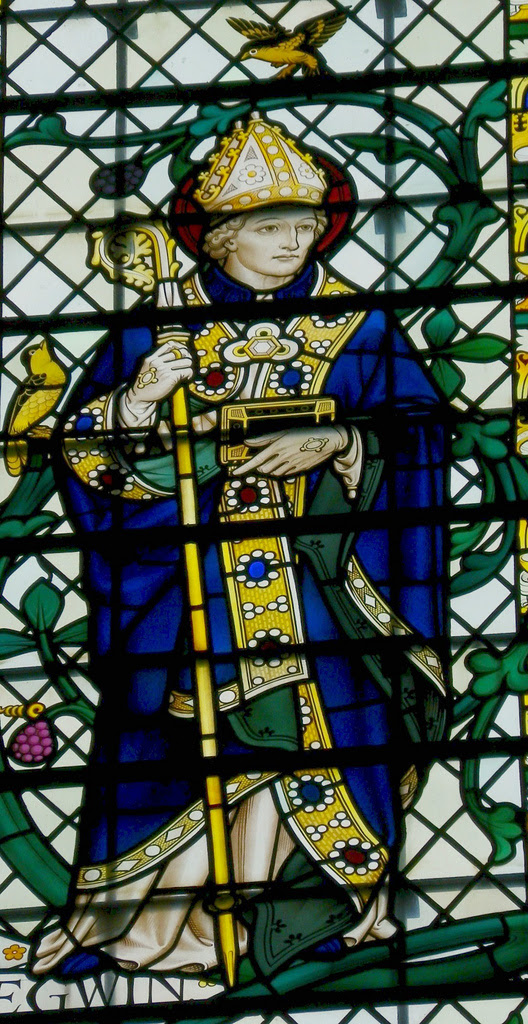 Stained glass window of St. Egwin in Worcester Cathedral by glass artist Geoffrey Fuller Webb. Photo taken by and with permission to use, by Robin Croft.

Third Bishop of Worcester; date of birth unknown; d. (according to Mabillon) 20 December, 720, though his death may have occurred three years earlier. His fame as founder of the great Abbey of Evesham no doubt tended to the growth of legends which, though mainly founded on facts, render it difficult to reconcile all the details with those of the ascertained history of the period.

It appears that either in 692, or a little later, upon the death of Oftfor, second Bishop of Worcester, Egwin, a prince of the Mercian blood royal, who had retired from the world and sought only the seclusion of religious life, was forced by popular acclaim to assume the vacant see. His biographers say that king, clergy, and commonalty all united in demanding his elevation; but the popularity which forced on him this reluctant assumption of the episcopal functions was soon wrecked by his apostolic zeal in their discharge.

The Anglo-Saxon population of the then young diocese had had less than a century in which to become habituated to the restraints of Christian morality; they as yet hardly appreciated the sanctity of Christian marriage, and the struggle of the English Benedictines for the chastity of the priesthood had already fairly begun. At the same time large sections of England were more or less permanently occupied by pagans closely allied in blood to the Anglo-Saxon Christians. Egwin displayed undaunted zeal in his efforts to evangelize the heathen and no less in the enforcement of ecclesiastical discipline. His rigorous policy towards his own flock created a bitter resentment which, as King Ethelred was his friend, could only find vent in accusations addressed to his ecclesiastical superiors. Egwin undertook a pilgrimage to seek vindication from the Roman Pontiff himself. According to a legend, he prepared for his journey by locking shackles on his feet, and throwing the key into the River Avon. While he prayed before the tomb of the Apostles, at Rome, one of his servants brought him this very key — found in the maw of a fish that had just been caught in the Tiber. Egwin then released himself from his self-imposed bonds and straightway obtained from the pope an authoritative release from the load of obloquy which his enemies had striven to fasten upon him. 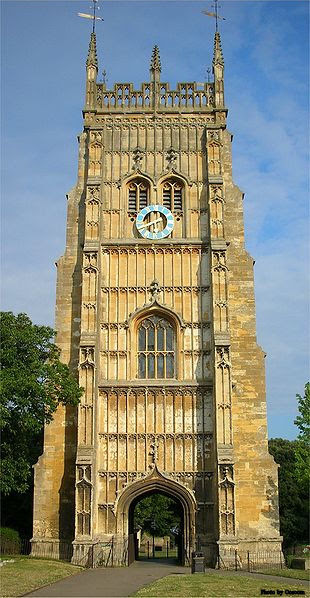 Due to Henry VIII's destruction of many Catholic Abbey's, Churches and Convents, all that remained after his plundering was the Evesham Abbey Bell tower.

It was after Egwin’s triumphant return from this pilgrimage that the shepherd Eoves came to him with the tale of a miraculous vision by which the Blessed Virgin had signified her will that a new sanctuary should be dedicated to her. Egwin himself went to the spot pointed out by the shepherd (Eoves ham, or “dwelling”) and to him also we are told the same vision was vouchsafed. King Ethelred granted him the land thereabouts upon which the famous abbey was founded.

As to the precise date of the foundation, although the monastic tradition of later generations set it in 714, recent research points to some year previous to 709. At any rate it was most probably in 709 that Egwin made his second pilgrimage to Rome, this time in the company of Coenred, the successor of Ethelred, and Offa, King of the East Saxons, and it was on this occasion that Pope Constantine granted him the extraordinary privileges by which the Abbey of Evesham was distinguished. One of the last important acts of his episcopate was his participation in the first great Council of Clovesho.