A heroic chaplain helps Americans prisoners on Christmas Eve, as bombs fall nearby

At 1:15 am, on June 6, 1944, most people in German-occupied Normandy were asleep. Then, from the west, came the increasing drone of aircraft engines and of anti-aircraft fire. The largest air armada ever assembled was passing over — 882 U.S. planes, which now began to disgorge their contents: thirteen thousand paratroopers of the 82nd and 101st Airborne Divisions.

The Americans’ task was to secure a number of causeways and create safety zones where gliders could land at first light to bring in reinforcements. Offshore, five thousand ships carrying 200,000 men were assembling. Operation Overlord, the Allied invasion of Europe, had begun. It was D-Day!

Among those dropping in the dark sky was Fr. Francis L. Sampson, a young Catholic chaplain, making his first combat jump. Landing in a deep stream, he cut away his hundred-twenty-plus-pound pack and was dragged into shallower water before he could unbuckle his chute. He then repeatedly dove into the water to retrieve his weapons: a Mass kit and holy oils, items he soon would need.

Father joined other paratroopers and they made their way to a French farmhouse that was being used for those who were severely wounded or injured in the jump. A Protestant chaplain was already there and the two of them provided first aid for most of the day. When it was clear that some of the men needed a doctor’s care, Father Sampson left to find the regimental aid station. Shortly after locating it, a decision was made to pull out. The chaplain volunteered to remain with the men who could not walk.

Close to Death
At dawn, German troops overran the house. Two soldiers took the priest outside and raised their rifles to shoot him, when a German noncom, a Catholic, stopped them. After being interrogated, Father was allowed to return to the wounded. That night, the house was shelled and partially collapsed killing several men. Later that day, the Americans regained the position, and the priest accompanied the injured to the division hospital. 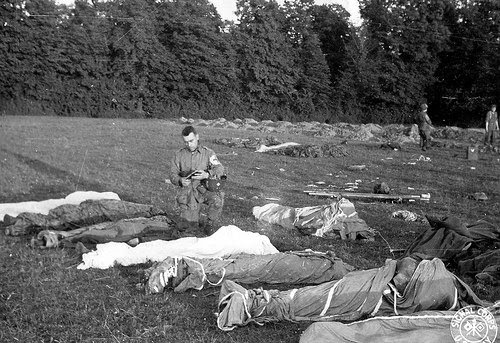 Here there were 500-600 wounded men. As the injured were continually coming in, Father assisted the division chaplain in spiritually administering to both American and German casualties. The next day, he went to the newly established division cemetery, where several hundred bodies lay wrapped in parachutes.

He read the internment ritual and remained for the burials. Father Sampson was in combat for another three weeks, working with aid men to rescue the wounded, offering Mass, hearing confessions, anointing the dying, and praying for the dead.

A Small Town Boy
Father Sampson was born in Cherokee, Iowa, on February 29, 1912, but grew up in Dalles, Oregon, where his parents ran a small hotel. Ordained in 1941, he served briefly as a parish priest before enlisting in the Army, early the following year. While in Chaplains School, he volunteered for the paratroopers and was assigned to the 101st Airborne Division.

In September 1944, three months after his experiences in Normandy, Father Sampson took part in an airborne assault on Holland. When the men were moving to their planes, Father stood outside the hangar shaking hands and blessing the men. Upon jumping behind enemy lines, he and the regimental doctor set up an aid station in a castle. Father went to find the commanding officer to inform him of their position. While he was away, the Germans seized the castle and everyone inside. 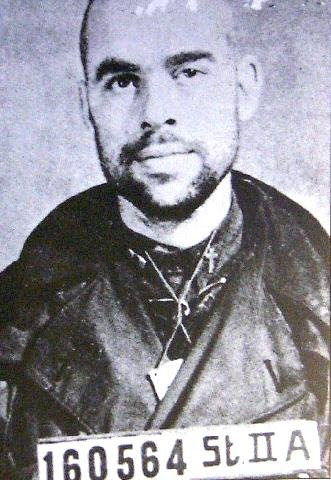 As a POW
In December, the German forces began a massive offensive, known as the Battle of the Bulge. The 101st was ordered to hold a vital crossroads at Bastogne. Learning that a number of American paratroopers were machine-gunned and left on a nearby road, Father took a jeep to aid them. He ran into a German unit and was taken prisoner.

In the ensuing days, he and a growing contingent of Allied prisoners were marched from Belgium through Luxembourg to Germany. On Christmas Eve, with the prisoners confined in a school auditorium, American planes bombed the area.

Father led the men in prayer and song and spoke of the presence of Christ among them. Over a ten-day period, the prisoners had been marched 185 miles. Some 1,500 of them then were herded into overcrowded boxcars, where they remained for almost six days. Given neither food nor water, their only sustenance was snow scraped from the tops of the boxcars as they traveled to their destination, Stalag II-A Neubrandenburg, a prison camp in Mecklenburg-Vorpommern, in northern Germany. 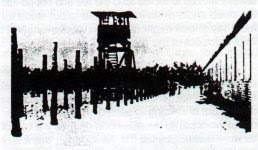 Guard tower and double row of fences at Stalag II-A.

Father Sampson was the only Catholic priest among the 950 Americans in a camp that held some 26,000 prisoners of various nationalities, only 21 of whom were officers. He had the men build a chapel in his barracks, where he held daily Mass and a non-denominational prayer service twice a week.

As the war drew to a close, restrictions on the prisoners eased. On Good Friday, Father Sampson led the men in the Stations of the Cross, and gave an hour’s meditation on the life of Christ. On Easter Day, he joined with French, Dutch and Polish Catholic priests, who were imprisoned, to celebrate together a Solemn High Mass for several thousand prisoners. In April 1945, after four months in the Stalag, the Russians liberated the camp.

Continuing in the Military
After the war, Father Sampson briefly left the service before reenlisting at the request of the Military Ordinariate, Francis Cardinal Spellman. When the Korean War started, Father was with the 11th Airborne Division. Shortly after the Americans landed at Inchon, the North Koreans retreated across the 38th parallel, with the 1st Cavalry Division in pursuit. The 11th Airborne was ordered to cutoff the fleeing enemy and rescue some 2,000 American prisoners who were being marched north of Pyongyang. 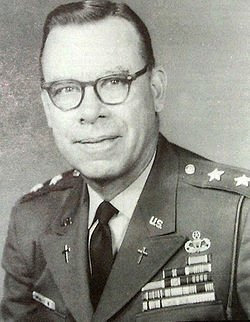 The prisoners, however, had been moved farther north during the night before the paratroopers landed. Although they did not rescue the Americans, they were able to capture several thousand North Korean soldiers. As the Chinese had entered the war, the Americans were severely outnumbered and retreated south. Father was busy administering to the men, including saying five Masses on Christmas Day to accommodate the dispersed units.

Father Sampson remained in the Army, assuming increasing responsibilities. In 1967, he was appointed Chief of Chaplains of the Army, with the rank of major general. After he retired in 1971, he was appointed as head of the USO. During the Vietnam War, he made annual Christmas visits to the troops, and was untiring in visiting wounded soldiers in hospitals. He died in January 1996, having received many military honors, including the Distinguished Service Cross for his heroism at Normandy and the Distinguished Service Medal.

About the Author: Lawrence P. Grayson is a Visiting Scholar in the School of Philosophy at The Catholic University of America. He also serves as State Director for Pro-Life Activities, Knights of Columbus, Maryland.