Real Men Put on the Armor of God 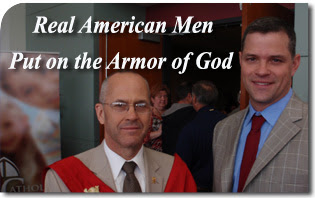 Over 1200 men come together at the DCU center in downtown Worcester, Massachusetts on a cool spring day. What were they doing? I will give you a hint. Joe Lombardi, the quarterback coach of the New Orleans Saints and grandson of the legendary Green Bay Packer coach, was also there. No it was not a football game.

It was the 12th Annual Catholic Men’s Conference, put on by the Worcester diocese, and Mr. Lombardi was there to speak about his Catholic faith and that of his grandfather. It was not exactly the way we would imagine American men, often stereotyped as couch-potatoes who care little about religion and ideology, spending a Saturday. I saw them pack the room to capacity to listen to talks about their Faith during what amounted to a one-day retreat and consider it to be another paradox that exists “Only in America.”


Such a large gathering of men for a one-day conference on Catholic themes is not as rare as one would think in America. Cincinnati has had crowds at their annual event which go into the thousands. Indianapolis has such large gatherings for their “Lions Breathing Fire” conference they are forced to hold it in the city’s convention center.

Similar conferences can be found in Connecticut, and as far away as Beaverton, Oregon where its conference website invites “real Catholic men” to “put on the armor of God.” Worcester does take pride however, in being the first to organize such an event and the steady numbers they draw each year is a good indicator they are doing something right. 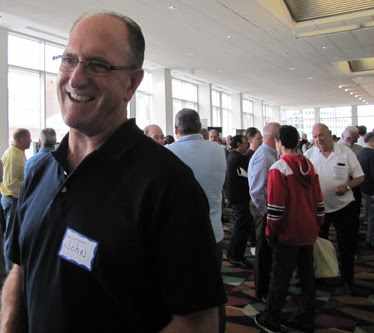 This year’s speakers included a conference favorite Fr. Larry Richards. His humor and captivating style held his audience’s attention even though his subject was about Penance and a look at the Ten Commandments, including the one most often transgressed in our modern world – the Sixth. While the subject of purity is a sensitive topic in any audience, one would expect it to be an almost forbidden subject in a room full of…well, manly men. It was not. One elderly gentleman, who spoke with me right after attending the talk, was delighted with the what-he-termed “hard hitting” subject matter. “[Fr. Richards] is not afraid to speak about tough subjects,” he said, “and we need to hear such things.”

Another impressive part of the conference was a long line of men that I observed. No, they were not in line for beer and chips, since, as we have already said, this was not a sporting event they were attending. These lines, --the longest I had seen since my Ash Wednesday experience in downtown New York-- were for the sacrament of Confession. A room full of priests sitting a safe distance from each other listened patiently to what must have been close to a thousand confessions. One could see the men took Father’s call to penance very seriously.

One of the attendees chatted with me before entering the queue. He had a horrific scar down the side of his face and another on his forearm. When I gingerly asked him where the scars came from, his response startled me; “A knife fight.” It did not seem an opportune time to go any further with my questions since my reason for being at the conference was to man a table with literature about TFP (Tradition, Family and Property). I offered him a rosary as a gift and asked him to pray for me. He smiled and said he would, before moving forward in the confession line.

While he might have been one of the colorful attendees, the reader must not look upon this as the typical one. Most of the men were well dressed, educated and articulate individuals looking for answers to tough questions and some brought their children. Two young men, ages 11 and 17, stayed for a long time watching TFP Student Action videos of  TFP members defending traditional marriage at such liberal bastions as Brown University, which has the reputation of being the Berkeley of the East Coast. Their father joined them after going to confession. He thanked me for the example of TFP members and described how his sons were “mesmerized” by what they saw.

The highlight of the Conference, and one which would have caused a liberal to have nightmarish flashbacks of Tim Tebow, was the talk given by Joe Lombardi. While he did talk a bit of football it was only by way of analogy, for men trying to be the best Catholic they can be. 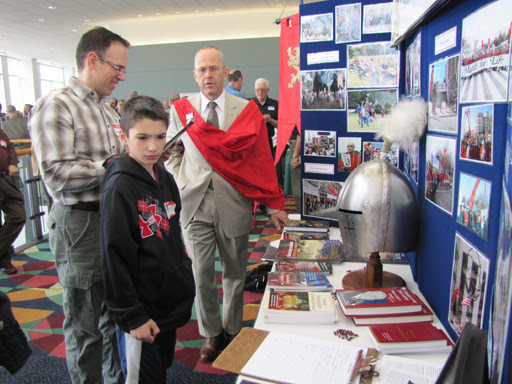 One of the attendees at the conference speaks with the author as his son watches TFP Student Action videos. (Courtesy of Catholic Free Press)

Much to our surprise he described how his grandfather --the late Green Bay coach-- studied in the seminary for three years and was a devout Catholic who attended Mass and prayed his rosary daily. (Moments before his talk he stopped by the TFP table and proudly showed me the rosary, now his prized possession, which had formerly belonged to his grandfather.) He continued this theme, and shocked the audience in the process, by explaining life in his own family which mirrors that of his grandfather. He, his wife and six children also try to make the rosary and Mass part of their daily routine. Decorations in the Lombardi household include a crucifix in every room and religious art throughout the house.

As I listened to this young man, speaking in such frank terms about his Catholic faith, to a group of men in Worcester, Massachusetts I could not help but reflect how contrary this is to what many would expect to find in America. This is, after all, a land where men can speak about sports but are cautioned to steer clear of the forbidden subjects like religion and politics.

Nevertheless these are the very subjects which American men most yearn to speak about. These Americans don’t mind being seen as “real men who put on the armor of God” even if others might consider them a paradox that exists only in America.