Bishop of Sens, missionary in Frisi, born at Milly near Fontainebleau, probably during the reign of Clovis II (638-56); died 20 March, before 704, in which year a translation of his body took place (Duchesne, “Fastes épiscopaux de l’ancienne Gaule”, II, Paris, 1900, 413). 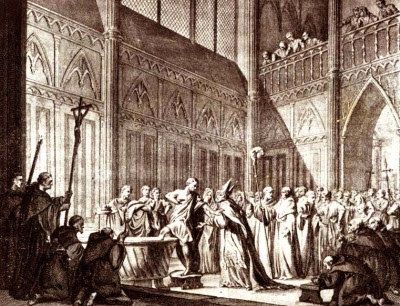 The Frisian king Radbod is ready to be baptized by St. Wulfram, but at the last moment refuses.

His father Fulbert stood high in the esteem of Dagobert I and Clovis II. Wulfram received a good education, and was ordained priest. He intended to spend a secluded life but was called to the Court of Theodoric III of Neustria and from there was elevated to the episcopacy of Sens, 684 (690, 692).

He was present at an assembly of bishops in 693 at Valenciennes. Two years later he resigned and retired to the Abbey of Fontanelle. During the second journey of St. Boniface to Rome Wulfram is said to have preached in Frisia. He tried to convert Radbod, but not succeeding he returned to Fontanelle. Some authorities record another and longer stay in Frisia, but, as neither Bede nor Alcuin mention his missionary labour there, it is barely possible.

The relics of the saint were brought to Notre Dame at Abbeville in 1058. His feast is celebrated 20 March. 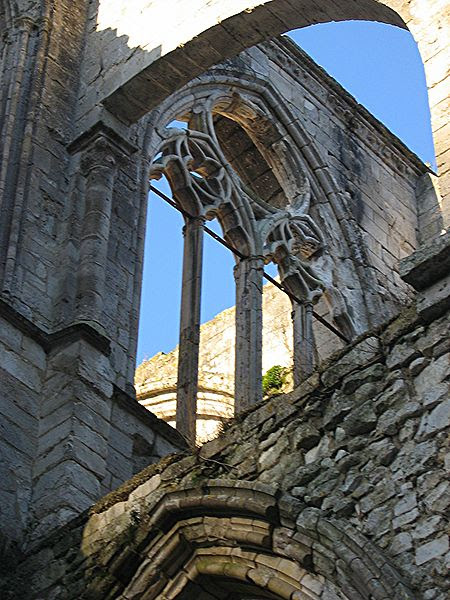 In the Saga of King Olaf, by Henry Wadsworth Longfellow, he is called Bishop Sigurd:

Loud the angry wind was wailing
As King Olaf’s ships came sailing
Northward out of Drontheim haven
To the mouth of Salten Fiord.

Though the flying sea-spray drenches
Fore and aft the rowers’ benches,
Not a single heart is craven
Of the champions there on board.

All without the Fiord was quiet
But within it storm and riot,
Such as on his Viking cruises
Raud the Strong was wont to ride.

And the sea through all its tide-ways
Swept the reeling vessels sideways,
As the leaves are swept through sluices,
When the flood-gates open wide.

“‘T’is the warlock! ’t'is the demon
Raud!” cried Sigurd to the seamen;
“But the Lord is not affrighted
By the witchcraft of his foes.”

To the ship’s bow he ascended,
By his choristers attended,
Round him were the tapers lighted,
And the sacred incense rose.

On the bow stood Bishop Sigurd,
In his robes, as one transfigured,
And the Crucifix he planted
High amid the rain and mist.

Then with holy water sprinkled
All the ship; the mass-bells tinkled.
Loud the monks around him chanted,
Loud he read the Evangelist.

As into the Fiord they darted,
On each side the water parted;
Down a path like silver molten
Steadily rowed King Olaf’s ships;

Steadily burned all night the tapers,
And the White Christ through the vapors
Gleamed across the Fiord of Salten,
As through John’s Apocalypse,–

Till at last they reached Raud’s dwelling
On the little isle of Gelling;
Not a guard was at the doorway,
Not a glimmer of light was seen.

But at anchor, carved and gilded,
Lay the dragon-ship he builded;
‘T’was the grandest ship in Norway,
With its crest and scales of green.

Up the stairway, softly creeping,
To the loft where Raud was sleeping,
With their fists they burst asunder
Bolt and bar that held the door.

Drunken with sleep and ale they found him,
Dragged him from his bed and bound him,
While he stared with stupid wonder,
At the look and garb they wore.

Then King Olaf said: ”O Sea-King!
Little time have we for speaking,
Choose between the good and evil;
Be baptized, or thou shalt die!?

But in scorn the heathen scoffer
Answered: ”I disdain thine offer;
Neither fear I God nor Devil;
Thee and thy Gospel I defy!”

Then between his jaws distended,
When his frantic struggles ended,
Through King Olaf’s horn an adder,
Touched by fire, they forced to glide.

Sharp his tooth was as an arrow,
As he gnawed through bone and marrow;
But without a groan or shudder,
Raud the Strong blaspheming died.

Then baptized they all that region,
Swarthy Lap and fair Norwegian,
Far as swims the salmon, leaping,
Up the streams of Salten Fiord.

In their temples Thor and Odin
Lay in dust and ashes trodden,
As King Olaf, onward sweeping,
Preached the Gospel with his sword.

Then he took the carved and gilded
Dragon-ship that Raud had builded,
And the tiller single-handed,
Grasping, steered into the main.

Posted by Robert Ritchie at 9:57 AM