On Saturday, March 17, at noon local time, traditional marriage rallies were carried out all across America, from California to New York.

The rallies were organized on a national level by America Needs Fatima, a campaign of Tradition, Family and Property (TFP), a group of lay Catholics with a large grassroots network of concerned Americans who are alarmed at the rapid advance of the radical homosexual agenda and even more alarmed at the tragic lack of leadership from politicians and clergy on this crucial issue. 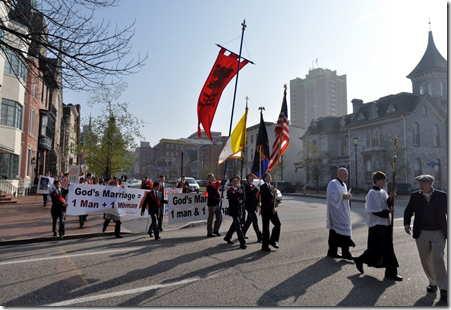 These photos are from the Traditional Marriage Crusade in Harrisburg, PA, right down from the state capitol building. 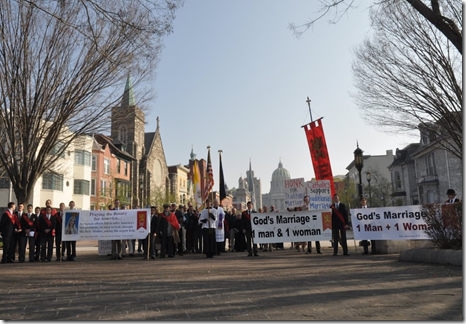 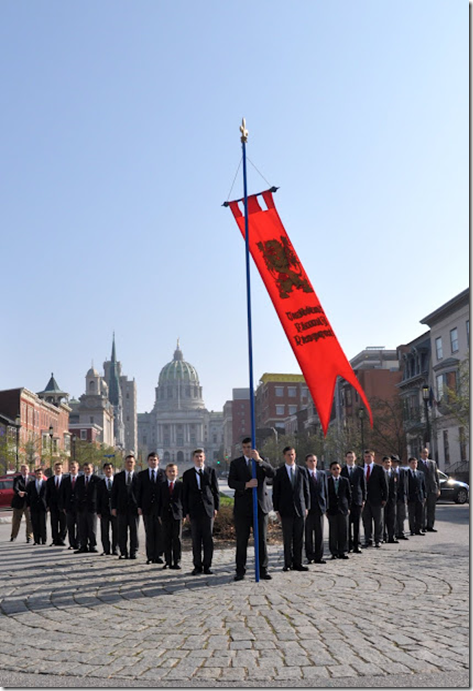 If we do not stand up for the defense of traditional marriage (and our other rights) then marriage as we know it will also go by the wayside.

And with the loss of traditional marriage, the accelerated destruction of the family will quickly become an accomplished fact, serving as the final death nail for our culture and opening wide the doors to all manner of perverse "legalized" behaviors.

Here is a brief summary of "10 Reasons Why Homosexual 'Marriage' is Harmful and Must be Opposed:”

3.     It always denies a child either a father or a mother.

4.     It validates and promotes the homosexual lifestyle.

7.     It defeats the state's purpose of benefitting marriage.

8.     It imposes its acceptance on all society.

9.     It is the cutting edge of the sexual revolution.

A more detailed answer for "Why Homosexual Marriage is Wrong" can be read here:

In closing, I would like to leave you with one final thought:  If we are not willing to stand up for traditional marriage, then who will?