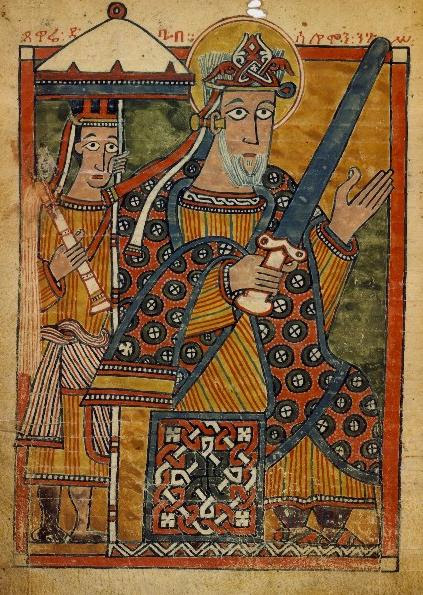 St. Elesbaan, from an Ethiopian Psalter

The Axumite Ethiopians, whose dominions were extended from the western coast of the Red Sea, very far on the continent, were in the sixth century a powerful and flourishing nation. St. Elesbaan their king, during the reign of Justin the Elder, in all his actions and designs had no other desire than to procure in all things the happiness of his people, and the divine glory. The mildness and prudence of his government was a sensible proof how great a blessing a people enjoy in a king who is free from inordinate passions and selfish views, to gratify which princes so often become tyrants. This good king, however, was obliged to engage in a war. But his motives were justice and religion; and the exaltation of both was the fruit of his victory. 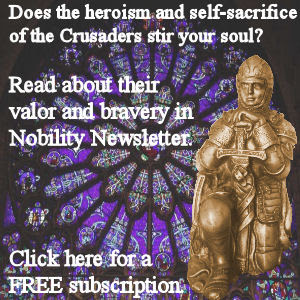 The Homerite Arabians dwelt upon the eastern coast at the bottom of the Red Sea, in Arabia Felix, and were either a part of the Sabæans, or their neighbours. This nation was full of Jews; and Dunaan or Danaan, a Jew who had usurped the sovereignty, persecuted the Christians. St. Gregentius, who was an Arabian by birth, and archbishop of Taphar, the metropolis of this country, was banished by him in 520. St. Aretas, the governor of the city Neogran, was beheaded, with four companions, for his constancy in the faith. His wife Duma, and daughters, also suffered death for the same glorious cause, and are honoured as martyrs on the 24th of October, in the Roman, and in other Western, as well as in the Eastern and Muscovite calendars. (1) 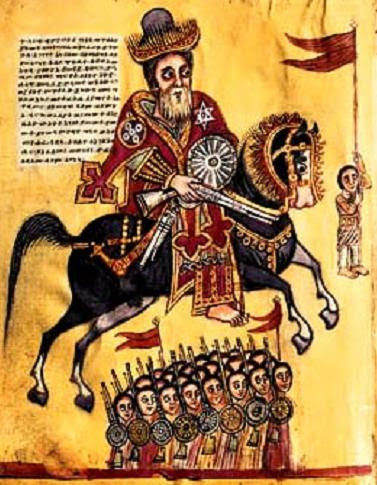 St. Elesbaan, King of Ethiopia, at the command of the Emperor Justin, lead an army against Dunaan.

The Emperor Justin the Elder, whose protection the persecuted Christians had implored, engaged St. Elesbaan to transport his forces into Arabia, and drive away the usurper. The zealous prince complied with this just desire, and having by the divine blessing defeated the tyrant, made use of his victory with great clemency and moderation, re-established religion, recalled St. Gregentius, and repaired the vineyard, which a furious wild beast had laid waste. He rebuilt the church at Taphar; and, by laying the first stone, would be himself the first architect. He placed on the throne Abraamius, a pious Christian, who governed by the counsels of St. Gregentius. That holy prelate had a famous conference with the Jews,(2) and wrote a book against vices,(3) extant in Greek in the Imperial library at Vienna. St. Gregentius died on the 19th of December, in 552.

Baillet tells us, that St. Elesbaan resigned his crown soon after his return into his own dominions: but Nonnus, in his Legation(4) testifies in 527, several years after this war, that Elesbaan then resided at Axuma, a very great city, capital of Ethiopia. 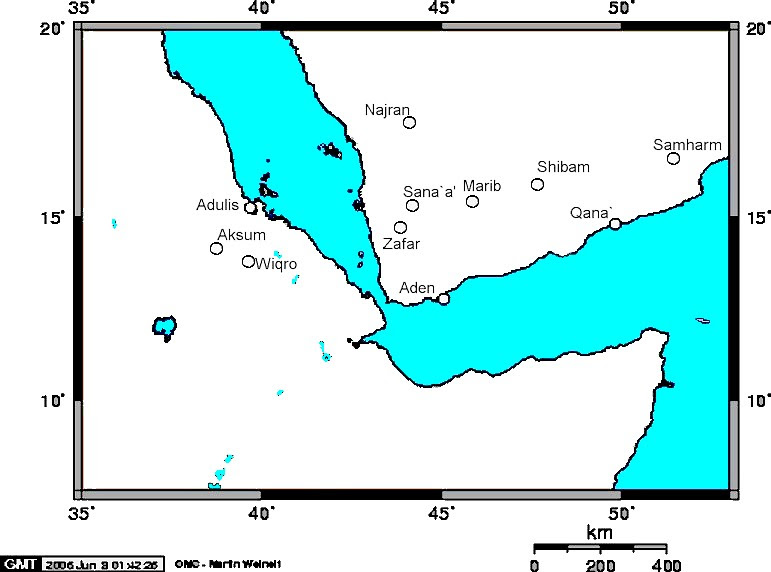 Map of the empire of St. Elesbaan. Photo by Yom

At length, this good king, leaving his dominions to a son who was heir of his zeal and piety no less than of his kingdom, sent his royal diadem to Jerusalem, put on sackcloth, and retired secretly in the night out of the palace and city to a holy monastery situated on a solitary mountain, where he took the monastic habit, and shut himself up in a cell for the remaining part of his life. He carried nothing with him out of the palace but a mat to lie on, and a cup to drink out of. His food was only bread, with which he sometimes took a few dry herbs; he never drank any thing but water. He would not allow himself the least distinction above the last among his brethren, and was the first in every duty of his new state. No seculars ever had access to him, and his whole employment consisted in the exercises of penance, the contemplation of heavenly things, and conversing with God, by whom he was at length called, by a happy death, to reign eternally with Christ. His name occurs in the Roman Martyrology.

Note 1. Their Acts are published in Greek by Lambecius, (Biblioth. Vindob. t. 5, p. 130, 132, et t. 8. p. 254, 260, 262,) and in Latin by Baronius Lipoman and Surius. Baillet suspects them because taken from Metaphrastes. But Falconius rightly judges that Metaphrastes gave them genuine, p. 23, which is shown by Jos. Assemani, Bibl. Orient. t. 1. p. 358, 364 et seq.) who gives us the original Syriac history of the Homerite martyrs, written by Simeon, bishop of Arsamopolis, in Persia, in a letter to Simeon, abbot of Gabula.
The Syriac historians, produced by Jos. Assemani, as Simeon, bishop of Beth-Arsamen, etc. agree in this history perfectly with the Greeks, viz. Sim. Metaphrastes, in Surius, (t. 5, p. 943.) Theophanes, Cedrenus, Procopius, Evagrius, etc. Likewise the modern historians of Abyssinia, who were Portuguese missionaries in that country, viz. Francisco Alvares, chaplain to the Portuguese ambassador in 1540, who printed that year the first and most faithful history of Abyssinia, and of his embassy; F. Bermudes, patriarch, wrote the second in 1565, but mixing many fables deserves credit only in things to which he was eye-witness; F. Peter Nais gave a third in 1627; F. Alphonso Mendez, patriarch of Ethiopia, wrote also a Latin history of that country. F. Lopo wrote another more at length, which Le Grand translated into French, adding several curious dissertations and notes, Paris, 1738. F. Balthasar Tellez compiled from these a new and more complete history of Ethiopia, in which he sets off the zeal of the Jesuits. From these and other helps Ludolph has compiled his history of Ethiopia, with a dictionary and grammar of that language.
Note 2. The Acts which we have of this conference have been interpolated.
Note 3. Lambec. in Bibl. Vindob. Cod. Theolog. 306. n. 33. p. 171.
Note 4. Ap. Phot. Cod. 3