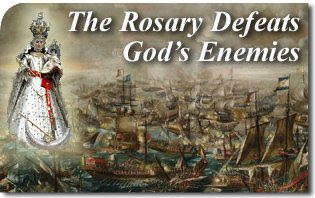 The Rosary — as spiritual weapon against evil — has a very long and precious history. In twelfth and thirteenth century France, a group of heretics known as the Albigensians was destroying the minds of the Catholic laity with its erroneous ideas. The Albigensians’ teachings encouraged suicide, many times by self-induced starvation, because they believed that the body was an intrinsic evil and that the soul must be liberated from matter at all costs. However, as history often shows, Providence raises up great Saints in times of dire crises. This time it was no different. Saint Dominic, born of noble lineage, received the Rosary from Our Lady in the year 1214.

Saint Dominic received
the Rosary from Our Lady in 1214. 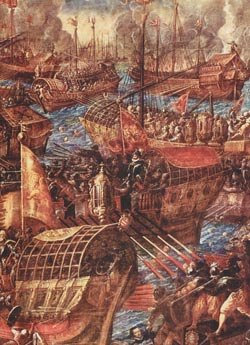 The Battle of Lepanto: a miraculous
victory for Christiandom.

The Rosary and
the Battle of Lepanto
The Battle of Lepanto was a crucial conflict between the Christians and the Ottoman Turks, one of the greatest naval battles of all time. The Christian lands around Greece and the Eastern Mediterranean were constantly getting sacked by Muslim pirates, and Imperial warships were ravaging the land. At this point in time, Pope Saint Pius V saw it appropriate to raise a Crusade against these heathen Muslims. After raising a Crusade, he asked every non-combatant across the whole Christian world to pray the Rosary.

“You shall obtain all you ask of me
by the recitation of the Rosary.”
Our Lady to Blessed Alan de la Roche

Even after this call to arms, the Christian fleet at Lepanto was greatly outnumbered by the Ottoman Turks. The Crusaders got on their knees and began to pray the Rosary. Soon after, the Christians and the Muslims were immersed in a bloody battle. Thus it was that on October 7, 1571, the Christian fleet was blessed with a miraculous victory. Pope Saint Pius V immediately dedicated the victory to Our Lady, establishing October 7 as “The Feast of the Most Holy Rosary.” 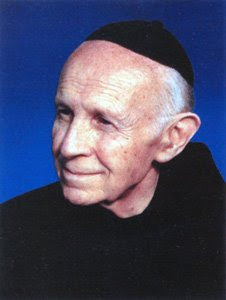 Fr. Petrus Pavlicek convoked the Viennese faithful to a public Rosary procession, asking God
to expell the communists
from Austria.

Holy Rosary Crusade of Reparation
After World War II, Austria was divided between four countries: America, France, the United Kingdom, and Russia. At the time, Russia was still communist. The section of Austria controlled by the communists was the richest, and included the city of Vienna. The Viennese were subject to the all the atrocities and tyrannies of communism. However, in 1946, Fr. Petrus Pavlicek, after making a pilgrimage to Mariazell, the principle Marian shrine in Austria, was told by an interior voice: “Do as I say and there will be peace.”
To obey this inspiration of Our Lady, Father Pevlicek founded the Holy Rosary Crusade of Reparation in 1947. This Crusade consisted of the Viennese faithful coming out of their homes in order to participate in a public Rosary procession in the streets of the city. The intentions of the Rosary were for the end of communism in their country and in the world. At first, the processions were minuscule, but in time they grew to staggering proportions. In 1955, after eight years spreading the word about the Crusade throughout Austria, the Rosary processions would reach sizes of half a million people, about 1/10 of the Austrian population. Finally, through the help of Our Lady, the Soviet forces pulled out of Austria in October of 1955, leaving the country for good.
The Rosary and the Fatima Message
Between May 13 and October 13, 1917, Our Lady appeared to three shepherd children, Jacinta, Lucia, and Francisco, at the Cova de Iria, near Fatima, Portugal. During six visits, Our Lady communicated to them a secret which had three parts. The first part was a vision of Hell. During this vision, Sister Lucia said numerous souls fell into Hell like “snowflakes.” 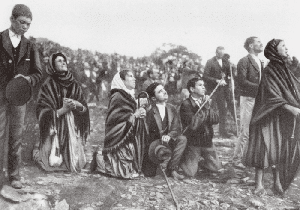 In Fatima, Portugal Our Lady appeared, asking for conversion, penance, reparation and sacrifice. To achieve this she requested the daily recitation of the Rosary. In the October apparition, Our Lady performed the Miracle of the Sun (photo above) for everyone to see and believe.

In the second part, Our Lady states that World War I would end, but “if people do not cease offending God, a worse one will break out during the Pontificate of Pius XI. To prevent this, I shall come to ask for the consecration of Russia to my Immaculate Heart, and the Communion of reparation on the First Saturdays. If my requests are heeded, Russia will be converted, and there will be peace; if not, she will spread her errors throughout the world, causing wars and persecutions of the Church.”
As Our Lady predicted, World War II erupted and the errors of atheist Communism spread. Our Lady added that many will be martyred and nations will be annihilated, if people do not convert. Have people converted? The answer is no. Can Divine punishment be avoided? 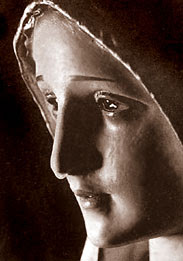 In July 1972, in New Orleans, La. this statue of Our Lady of Fatima miraculously wept real human tears.

It depends on the world’s fidelity to Our Lady’s requests.
Lucia asked Our Lady during the apparitions, “Who are you and what do you want?” Our Lady responded, “I am the Lady of the Rosary, and I have come to warn the faithful to amend their lives and ask pardon for their sins. People must not continue to offend the Lord, Who is already so deeply offended. They must say the Rosary.”
Therefore, Our Lady gave us a solution: the recitation of the daily Rosary for the conversion of sinners. The Fatima message is a remedy for our culture immersed in sin. If it were not for Our Lady’s promise that “Finally, My Immaculate Heart will Triumph,” we would be much dismayed and disheartened. So let us heed her requests. Let us practice the First Saturday devotions. Let us pray the daily Rosary. By fulfilling these requests, we will be consoling the sorrowful and Immaculate Heart of Mary and hasten the triumph of good over evil.
Related Articles:
Quotes About the Rosary from Our Lady, Popes, and Saints
Tears, a Miraculous Warning
Find a Public Square Rosary Rally Near You