The Benedict Option Without Benedict 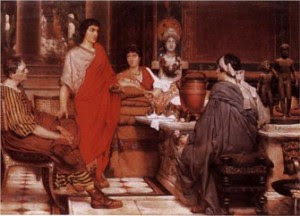 “Saint Benedict did not peacefully live out his life in the wilderness detached from society. He never did write off decadent Rome.”

Many conservatives are facing the brutal reality of a culture that undermines their Faith and destroys their values. Not a few have made the logical comparison to the Christians facing both the Roman Empire’s decadent “establishment” and the ruthlessly aggressive ways of the barbarians who threatened to destroy what remained of civilization.

Is Technology Ruining Your Life? Take A Quick Quiz To Find Out By Clicking Here.

And so, the tendency of modern Christians is to write off today’s establishment and neo-barbarians. Our decadent establishment has facilitated the culture of death by supporting abortion laws and other modern evils. Today’s wired neo-barbarians in their turn have departed from Christian norms and adopted aggressive attitudes and lifestyles that threaten our own, which can be especially seen from the constant attacks on the traditional family.

That is why many say the only thing to be done is to admit defeat and strategically retreat into close-knit communities in which they might intensify their Christian Faith. Writer Rod Dreher has called such retreats the Benedict Option since it seems to imitate the strategy of Saint Benedict of Nursia who in the sixth century withdrew to live an intensely liturgical life in isolated communities far from both decadent Rome and raging barbarians.

It is true that Saint Benedict did gather together monks and established a rule centered on the liturgy. As the founder of Western monasticism, he laid the foundation of Christendom. But if there was someone who did not exercise the Benedict Option, it was Saint Benedict himself.

Read the rest of the article here: