St. Philip of Heraclea and Companions

Philip, the bishop of Heraclea in Thrace, became a martyr of Christ during the persecution of Diocletian.  He was a diligent, courageous shepherd who confirmed the faith of his people, and when induced to flee the persecution, chose to remain. 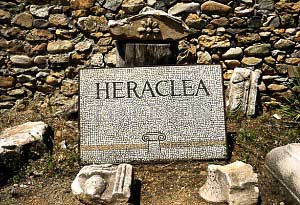 Severus and Hermes were a priest and deacon who endured tribulation, prison and martyrdom with him.

At first, Bassus, the governor, ordered the door of the church sealed, to which Philip retorted: “Do you imagine that God dwells within walls, and not rather in the hearts of men?” and continued to hold assembly outside. Finally the sacred vessels and books were confiscated, the sacred books burned publicly, and the roof of the church incinerated.

Under torture, Philip was invincible. Pointing to a large statue of Hercules, Bassus bid him to only touch it, but the martyr refused saying that graven images had value only to stone-carvers but were helpless to worshipers. Then the deacon Hermes was asked if he would offer sacrifice, he refused.

Bassus’ term as governor being up, another, Justin, a ruthless man, stepped in.

Under Justin, Philip was beaten till his flesh was pulp.

Imprisoned with Hermes and another, the priest Severus, Philip faced martyrdom alongside Hermes by fire. Buried up to their knees, the martyrs were burned. But when the flames died and the smoke cleared, although the martyrs were dead, their bodies were found whole. Justin ordered the bodies to be thrown into the river, but pious citizens fished them out with nets and gave them proper burial.

In prison, the priest Severus rejoicing on hearing of their victory,  begged God to think him not unworthy of following in the footsteps of his bishop and Hermes, and suffered martyrdom the next day.