Bring your rosary and banner to your local pro-life march!

As the 37th anniversary of the infamous Roe v. Wade decision approaches, dedicated members of the pro-life movement are preparing to confront that disgraceful event in our nation's history with public demonstrations across the United States. 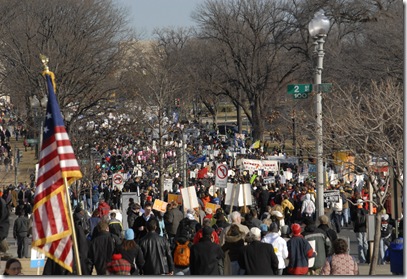 Some members of America Needs Fatima are holding public square rosaries this Saturday to offer reparation for the horrors of millions of innocents slain on the altar of "choice".  As if the life of a human being created by God is subordinate to the "choice" of men.

Dear friends of Our Lady, if possible, won't you consider participating in one of these rallies?  Each year when these rallies take place members of the public are touched by observing the 37 year perseverance of pro-lifers.  As a result of these rallies and pro-life efforts throughout the year, hearts are changed.

Members of some groups such as, "Silent No More" with great courage, publicly proclaim their regret either for having had an abortion or in the case of spouses, supported abortion.  Members of this organization at one time in some manner supported abortion. As a result of grace and oftentimes to some action by a pro-lifer they changed and repented of their previous "choice".

Members and Supporters of the American TFP and America Needs Fatima will be attending rallies all throughout the United States.

Your presence to defend innocent life in the womb therefore, is essential on January 22nd at your local pro-life rally.

Remember to bring your rosary and your banner!

Posted by Robert Ritchie at 2:42 PM