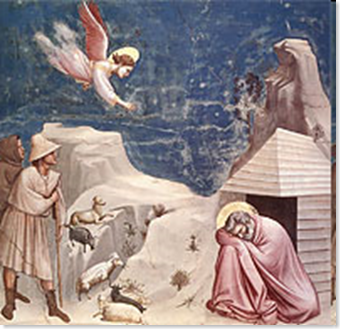 When his sacrifice was rejected by God, St. Joachim reached a climax of suffering, but this became also the pinnacle of grace.

The excerpts about Our Lady’s father, Saint Joachim, are taken from The Liturgical Year, by Abbot Gueranger, OSB.

Joachim’s wealth, like that of the first patriarchs, consisted chiefly in flocks and herds. The holy use he made of it drew down God’s blessing upon it. But the greatest of all his desires heaven seemed to refuse him. His holy spouse Anne was barren. Amongst all the daughters of Israel expecting the Messias, there was no hope for her. One day the victims Joachim presented in the Temple were contemptuously rejected. Those were not the gifts the Lord of the Temple desired of him; later on, instead of lambs from his pastures, he was to present the mother of the Lamb of God, and His offering would not be rejected.

During Old Testament times, the Jews scorned sterile couples. They prided themselves in the possibility that one of their descendents would be the Messias and derided those for whom this was impossible. Thus, Saints Joachim and Anne were looked down upon.

Their disgrace was augmented when they reached the threshold of old age, still childless. It seemed that all their hopes were vain. Nevertheless, Saint Joachim prayed for God’s mercy and they had a daughter…and what a daughter she was!

This day, however, he was filled with sorrow and fled away without returning to his wife. Saint Joachim felt deeply the shame of his sacrifice's rejection and fled into the mountains.

He felt shame since his offering was rejected and despondent since his ardent desire that the Messias come from his lineage, was impossible. Faced with these sufferings, he felt a tremendous sorrow and fled into the mountains without even speaking to Saint Anne.

He hastened to the mountains where his flocks were at pasture; and living in a tent, he fasted continually, for he said: “I will take no food till the Lord my God look mercifully upon me; prayer shall be my nourishment.”

This is a very beautiful way to pray. It is a way of storming Heaven with the certainty of being heard, and forcefully taking the grace one desires. This is the type of violence that, according to scripture, gains the Kingdom of Heaven. We must doggedly refuse to give up, even when God seems to deny our requests.

Once when Saint Catherine of Siena was praying to Our Lord in the Blessed Sacrament, she extended her hand and said: “I will not leave this place, until You extend me Your hand.” Then, Our Lord mercifully opened the tabernacle, extended His Hand and pressed hers in It. What confidence the saints have! This is what makes them saints. This is how they obtain everything from Our Lady.

Meanwhile, Anne was mourning her widowhood and her barrenness. She thought her husband had died.

She prayed in the garden as Joachim was praying on the mountain. Their prayers ascended at the same time to the Most High, and He granted them their request. An angel of the Lord appeared to each of them and bade them meet at the Golden Gate; and soon Anne could say: “Now I know that the Lord has greatly blessed me. For I was a widow and I am one no longer, and I was barren, and lo! I have conceived!”1

Our Lord wanted to purify them by culminating their long trial with an extreme suffering. Consider their respective situations. Saint Joachim went into the mountains after his sacrifice was rejected. Saint Anne mourned her presumed widowhood and barrenness in a garden.

When their respective pains reached this climax, the pinnacle of grace and consolation arrived as well. Saint Joachim was still alive and Saint Anne had conceived Our Lady who was to be channel for Our Lord’s coming. This should teach us the eternal lesson of confidence.

Sometimes everything seems lost, we find no way to proceed and Providence treats us in an inexplicable way. These are the times we must confide most of all, because it is when everything is explained. Happy are those, whom the Lord leads in inexplicable ways. These will receive the greatest explanations.

We should ask Our Lady of the Assumption and Saint Joachim that they grant us this confidence that can withstand anything, even the most inexplicable problems and greatest sadnesses.

Posted by Robert Ritchie at 7:53 PM